Greg and I just recently moved to a house that we really like, but since it's so old, we wondered if it might be haunted. We've been in our new home now for two months, and we've about concluded that it is, indeed, haunted.

A house that has been around for 118 years would most certainly have at least one spirit or ghost in it!

To provide evidence for my claim, just look at the following photograph that I took during our yard sale earlier this month- All I did to this photo was crop it off to show the paranormal aspects better, and I also added my watermark.

I cropped it even more in this photo- 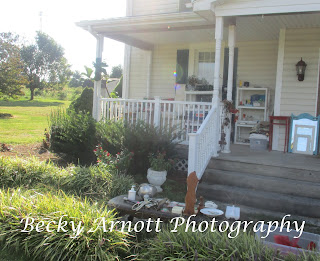 Notice the obvious ectoplasm, as well as orbs, on the left side of the photo. Also, notice the antique mirrors leaning against the wall of the house. Each one has a paranormal white line running through it.

I finally concluded that the former owner of the house who just recently died, didn't like us selling some of the items in the yard sale that were left at this house that he had previously owned. For example, the large orb in the photo is right above a Christmas tree that is in the white box.

What's more, there are more signs that this house is haunted-
-I took a picture of Mitzi on the stairway, and the part near her and on her were bleached out.
-Kallie often just stares up the stairway at night when no one is up there. What does she see?
-I took pictures of Greg as he was opening his birthday gifts, and ectoplasm showed up in several of the photos.
-A small potted tree on the front porch just fell over on its own; a string that was holding it upright broke. We don't know how that happened since it wasn't even windy that day.

Also, we have a little cabin on our property that's unfinished. It has no electricity or water. One day I was on the porch when I heard a noise come from the inside. How could that be when no one was in there? The door was even locked! It was supposed to have been a workshop, but apparently, the owner died before it was finished. 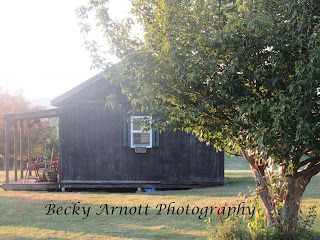 Our Haunted Cabin (Notice the ectoplasm!)

So, not only is our old house haunted, but our cabin is, as well, and it isn't even old!

All of this is okay with Greg and me since there doesn't seem to be any evil attached to anything that's happened so far. Besides, we're used to living in haunted houses! I tell about our houses as well as other paranormal experiences in my book, "Photographic Encounters of the Spirit Kind." To learn more, please click on the link above.

Thanks for visiting! Until Saturday, October 19, 2019, Becky