Answers from the Psychic

I finally got to talk to my currently favorite psychic whom I've found to be very accurate. She cleared up several things that had been puzzling me concerning the paranormal.

The reading with her was just yesterday, so it's still fresh in my mind. I told her that some strange things had been going on in our house that I wished that she'd explain. She then said something that was hard to believe, that our house was not haunted! I then told her that earlier in the year she had told me that our house was haunted by a man who was the previous owner. She said that he was gone! That was such a relief for Greg and me to hear!

I told the psychic that I had used a couple of cleansing techniques to get rid of negative energy. (Please see my 3/22/20 and 6/21/20 blog posts for more information about the rituals I used.) She then congratulated me for a job well done!

I was really happy that the rituals had worked so well, but I also explained to her that just a few weeks ago, Greg and I were awakened during the night by a loud noise in our bedroom. 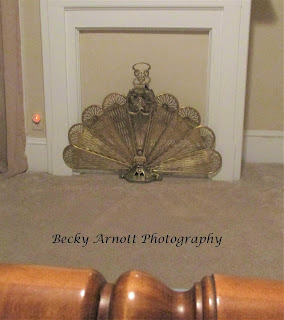 It sounded to both of us like something had fallen somewhere between our bed and the fireplace on the opposite wall! We had absolutely no idea what had caused this noise.

I was stunned when she said that the noise was caused by spirits attached to our area, not to our house, that the spirits were Civil War soldiers moving through! When they knocked something over in our house, it was like it was in their space, a sort of time warp! Weird!

With help from the psychic, I was then able to put everything together, to answer the questions that I mentioned in my last blog post on 11/22/20. It was all becoming clear to me now- It wasn't the previous owner at all this time, it was Civil War soldiers that we saw and heard!

The large orbs on our porch, the cigarette smoke in the yard, and... 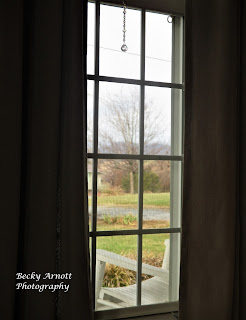 the mysterious figure of a man that I saw two different times pass by this living room window were apparently all due to the spirits of soldiers from the time of the Civil War!

I did a little research after my psychic reading, and I discovered that cigarettes were used during the Civil War era. Greg, the psychic, and I were not sure of this fact during the time of the reading. Also, with Greg's help and the Internet, I found out about a Civil War battle in nearby Saltville because of the salt mines. My research also stated that "Federal and Confederate troops passed through the town (where we live) several times...."

So now we know. This is something we can live with. There's nothing to fear. The spirits of these soldiers are in their time period, and we are in ours, but every once in a while, we become aware of theirs. That's okay since we can always use a bit of excitement in our sleepy little town.

In nearby Abingdon, I took this photo of Christmas-caroling figures on a street corner. It seems that a sprit is attracted to this little boy figure. Could this be the Christmas spirit? 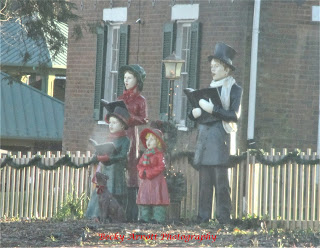 Wishing you a very merry Christmas and a very happy 2021!

(Special notes-Thinking of my father today, a special spirit whose birthday was on December 19. Also, next month, I'll report what the psychic said about our nearby cabin.)

Thanks for visiting! Until Saturday, January 16, 2021, Becky

Posted by Becky Arnott at 9:29 PM No comments: