Large Orbs, and a Ghostly Handyman?

First of all, I have two really intriguing spirit photographs to show you that my sister-in-law Cris sent to me.

Here is the first one- 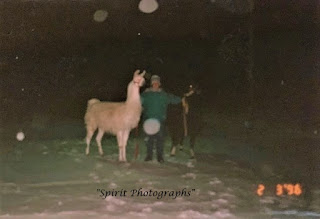 Several years ago, Cris's friend took a picture (above) of Cris, two llamas, and several orbs on a cold night in the snow. A couple of the orbs are rather large.

Her picture-taker friend has a gift for taking spirit photographs just as Cris herself does, as evidenced by another photograph she sent me- 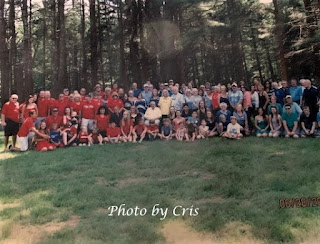 This is a photo that Cris took of a large family reunion and a large orb! To the left of the orb in the center is another faint orb.

Spirits seem to be drawn to places where there are special gatherings of people like at reunions, churches, parties, holidays, etc.

Thanks, Cris, for sending these great photographs of orbs!

Although I don't have any spirit photographs to show of my own this month (which is unusual for me!), I do have a personal spirit story to tell, that just happened today!

Late this afternoon, Greg and I went to our storage building which is behind our house. I don't often go there with Greg, but there was something I wanted to put in there while he looked for something he needed.

As he turned the door knob, he said that he had noticed for the past week that the door knob to the building wasn't loose any more, that it was like a handyman had come by and fixed it, although no one had. He was so desperate for an answer that he even asked me if I had fixed it. (Now that's funny! Ha, ha!)

He even theorized that the cold weather might have tightened it up!

He had thought about fixing it himself, but wasn't quite sure how to do it, so he'd put off working on it. Also, he's been busy working on other, more pressing projects lately.

Then, we looked at each other, and had to be honest with ourselves about how the door knob got fixed-The man who had lived in our house, and had expertly built the cabin on our property, and had died a few months ago, apparently had put his skill to work on "his" doorknob! He either just loves doing that type of work or he saw a need and fixed it or he has finally accepted us, and decided to help us out!

Now, if he would just go upstairs in our house and do some work on a couple of unfinished rooms, (We're having to wait for a carpenter to come and do some work.) we'd be even happier and more appreciative!

Wishing you a very merry Christmas and a happy New Year!