Recently, Greg and I had a frightfully delightful time on a local ghost tour in historic downtown Columbia, Tennessee. 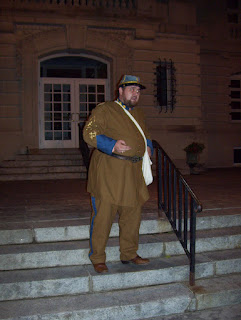 On the Court House Steps

The tour was short, sweet (and scary!), and to the point.  By using the word "short," I really mean the perfect amount of time of over an hour.  (We have been on some tours that were so long that we got bored and wished they would just hurry and end.  Once, it got so late that we decided to leave early.)  The tour had just enough history mixed in with the ghostly tales to make it interesting. 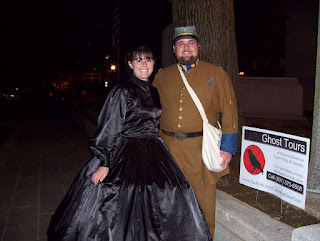 Our very professional tour guide was Adam Southern, accompanied by his wife, Kayla.  Both were dressed in Civil War garb which added a nice touch.

We met at the court house which is supposed to be the most haunted place in the whole area.

There were plenty of tales of murder and mayhem.  Adam also told of his own personal experiences such as his encounter with the lady in white.  Strange things have even happened during the tour itself several times.

Since Adam works at the library, he has researched the ghostly goings-on in the town very thoroughly.  (The library was also one of the ten places featured on the tour.)

The only spirit photograph that we took on the tour was one that showed a small orb near the door of one of the buildings.

All in all, it was a memorable evening, reasonably priced, that I would highly recommend to anyone who likes to "walk on Columbia's dark side," as it says on the tour info.

Thanks for visiting!  Until next Saturday, Becky
Posted by Becky Arnott at 8:58 PM No comments: 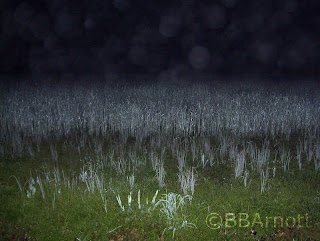 For any paranormal stories you'd like to tell, please e-mail me :   spiritphotographs@gmail.com
Thanks for visiting!  Until next Saturday, Becky
Posted by Becky Arnott at 8:08 PM No comments:

I have been interested in the paranormal since I was a child.  Even now, I have a childlike wonder of subjects such as space aliens, Stonehenge, crop circles, and, of course, ghosts.  I love shows that feature strange phenomena.  I'm most curious about ghosts, since I discovered a few years ago that I had the knack of taking pictures of the spirit world.  (I'm not alone in this as my brother and even my husband also have this same ability!)  We're nothing special.  We're just ordinary people who have had some extraordinary photographic experiences.

I plan to have a book out soon which details our adventures into the unknown.

I am a re-designer and organizer as well as an amateur photographer.  One day, as I was rearranging some furniture in a client's house, I noticed some ectoplasm in a photo I'd taken while documenting "before" and "after" pictures, as I always do when I work on a job.  (Believe it or not, most of the time, I don't even think about taking pictures of spirits, nor do I see them ahead of time.  They just occasionally decide to show up when I least expect it!) 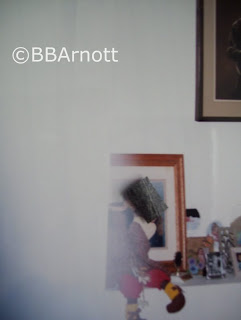 The ectoplasm is pretty obvious in this photo.


My mother and I were greeting someone we know when my husband Greg snapped this photo. 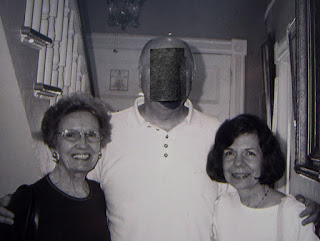 It looks as though the tiny orb above this man's head (whose face is blacked out for privacy) is reflecting on his bald spot.  Guess some orbs even have a sense of humor!

Thanks for visiting!  Until next Saturday, Becky
Posted by Becky Arnott at 8:59 PM No comments:

A few weeks ago, Greg and I visited a really interesting place, Falcon Rest Mansion and Gardens. 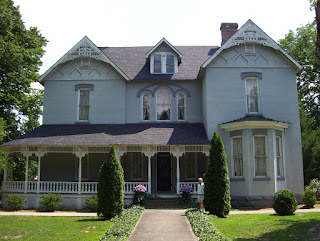 We had a delicious lunch there which even included pink lemonade! 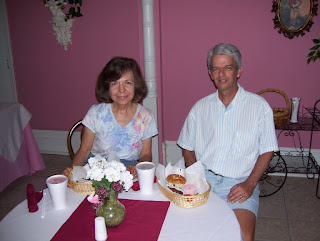 We also enjoyed browsing their gift shop which is chock full of all sorts of intriguing items.  We even bought a couple of things.

Afterwards, we took an informative tour of the mansion. 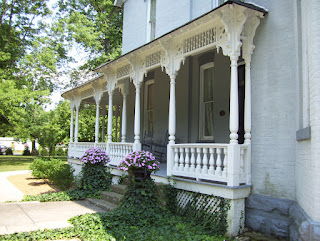 The tour turned into a semi-ghost tour as we questioned our tour guide about some eerie things that we'd read about on the Falcon Rest web site, including a figure in one of the windows of the old house. 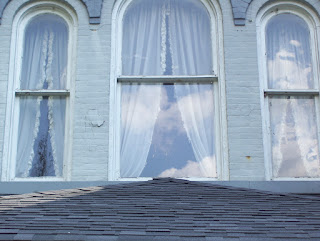 This is our own picture of the haunted window, but we don't believe anything strange showed up in our photo as the eerie-looking ectoplasm is merely clouds reflected in the panes of glass.

She told us several personal paranormal experiences she'd had there, including a child's ball rolling on its own!

Visitors aren't allowed to take pictures inside the mansion.  If we had taken some, we know we'd have left with a lot of  interesting photos!

We toured the beautiful grounds on our own. 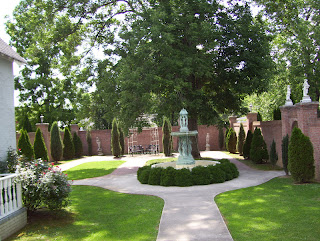 There are all kinds of fun things to do at Falcon Rest.  Be sure and check out their great web site.

We'd love to hear about any ghostly experiences you've had.  Please e-mail us-  spiritphotographs@gmail.com .


Thanks for visiting!  Until next Saturday, Becky
Posted by Becky Arnott at 10:20 PM No comments: