This "Spirit Photographs" blog post is quite unusual in that I'm featuring for the first time a paranormal video that someone sent me.

A few weeks ago, I found a message on my phone. The message wasn't very clear, so I didn't quite know what to expect when I returned the call. It was from a longtime friend, Mary, that I hadn't heard from in a while. She said that since Greg and I were experienced in ghostly matters, and since I had written the book, "Photographic Encounters of the Spirit Kind," * she thought that we could help her and her husband, John, to understand what was going on in their barn.

John has a new workshop in the barn, so they have a doorbell camera there to help protect the tools that he has in there. They started noticing unexplained balls of light moving around which the camera had recorded in the dark after he closes the door and leaves. Some of these balls of light were brighter than others, but they all move quickly. In the summer, they had thought that the balls were perhaps flying insects. 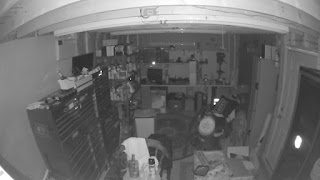 Notice the orb in the lower right of the photo. It's oval-shaped, and not very bright. The bright spots are just reflections.
Here's the intriguing video that they sent us-
This was really exciting for us since we've never before seen anything like this except on some of the paranormal TV shows. Greg and I both have the gift of taking paranormal still photos, but we've never tried taking videos. Maybe that's something we ought to investigate, to get into.
Also, as I've said before, we take ghostly photographs, but we need a psychic to interpret them for us.
So, I called Hawley, a gifted psychic, so I could let Mary and John know what was going on in their barn. She said that the orbs were good, harmless, and very positive which was great news! The orbs had very high, concentrated energy, and in fact, they were happy and protective, something like sprites or fairies. Boy, we should all be lucky enough to have energy like that around us! These fairies typically help animals and plants, although Mary said that there were no animals in the barn.
Mary seemed satisfied with the psychic's reading. I told her that the psychic had said that they could just ask the spirits to leave if they didn't want them there, but Mary said that they had already told them not to leave, that they liked them.
Anyway, it was good to hear from my friend, and I appreciate her and her husband letting me share their experience with my blog readers, and to let everyone know that not all paranormal activity is scary or evil, and that many times, spirits are just trying to help us out here on Earth.
While I had Hawley on the phone, I asked her about the ghostly story and the photo that I mentioned on my 10/16/21 blog post last month, entitled "A Ghostly Sighting, and More!"
Of the ghostly sighting that my relative, whom I'll call Jenny, told me about, Hawley said that the couple she saw didn't even see Jenny. They were in their own time period which was probably in the 1800's or 1900's. They lived in that area, and they were attending a funeral. A very sweet child in the family had died, and the child had held the family together. The couple was traumatized by the death. She said that Jenny was psychic, and that Jenny's sighting was really unusual and interesting. I'd like to thank Jenny for sharing her paranormal experience with me and the world!
I also asked Hawley about the photo I took of a park in Virginia. She said that spirits like to show themselves to me. She told me that the spirits in the photo were benign, not human, that they were fairies or wood nymphs.
Another strange thing about the park photo is that a few days after I'd talked with the psychic, I saw anther photo that another psychic photographer had on social media, and it looked very similar to mine! I couldn't believe it! It even had a large violet orb at the bottom of the photo like mine.
This is a very strange world!
*The Kindle version of "Photographic Encounters of the Spirit Kind" by Becky Arnott can be purchased on Amazon for $2.99. Please see the widget above.
Happy Thanksgiving!
Thanks for visiting! Until Saturday, December 18, 2021, Becky