Recently, I've been looking through old memorabilia, trying to organize it. It's been a really big job because we have so much stuff, especially photographs. We have around 70 photo albums, and we could have more, but I just don't have all of our photos in our new albums yet.* Not long ago, we had a visitor who asked if there were photos in all of the albums on our shelves because he just couldn't believe what he saw.

A few of our albums have only paranormal photographs, but some of our paranormal photos are scattered about in our older albums since at the time we didn't realize that they were paranormal. A few others are just loose in boxes.

One such photograph is below- 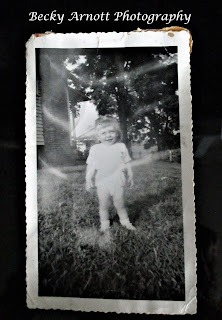 This is a photo of me when I was little, in the side yard at our house. It was taken by my father who was an avid photographer. Of course, this was taken with a film camera, and whenever we got a photo back like this one with streaks, etc., we'd just say that there was something wrong with the film. However, I know better now, that this photograph and others like it actually had ectoplasm in them!
In my book, "Photographic Encounters of the Spirit Kind," I have a whole chapter with paranormal photographs from my childhood. For more information about my paranormal book that is for sale on Amazon, please see the widget above.
It's really strange that I'd never realized until the other day that I'd never even thought about where my ability to take paranormal photographs had come from until I was looking at Daddy's photo (above). It then finally dawned on me where I had gotten my paranormal gift. This gift was passed on to my brother, as well. Some of his photos are even featured in my book.
As I further studied our photos, I noticed that my mother had also taken several of the photographs that had ectoplasm, etc. in them. Our family certainly was blessed with this ability!
Although Greg is not related to me except by marriage, of course, strangely enough, he has this same ability. (Maybe it's because Greg and I are soulmates!) I believe that he'd have as many paranormal photos as I if he just took more pictures.
More people than you'd think have this ability, but they don't realize it. Start analyzing your own photographs. You just might surprise yourself!
*Note: In the first paragraph above, I paused for a few minutes where you see the asterisk so I could take a break and get a snack before I went further. I just needed a little tide-me-over-until-my-next-meal snack, so I didn't get much to eat. The snack consisted of only a dried fig and a date which would serve the purpose just fine.
I put the saucer with a fork and my snack down on the countertop so I could go and do something else, and when I got back, the fork was moving up and down on the saucer that it was on. I thought to myself that it was like a seesaw or some sort of perpetual motion machine. I was fascinated, and I wondered how long it would continue to go up and down on its own. After a couple of minutes, I started to really wonder about when it would stop moving, but it just kept going, so I quickly got my camera and started taking pictures to document this phenomenon. (I never thought about using the video feature of my camera until it was too late since I very seldom use it.) I finally began to think that this must be something other-worldly! 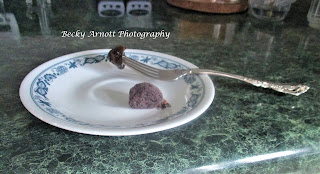 I decided to run outside and tell Greg about it. He came in and couldn't believe that it had been going like that for around five minutes. He's very scientific, but he had no idea as to how it could have been going that long on its own. When it finally stopped, I estimated that it had continued that same movement for about seven or eight minutes!
There's only one explanation for what had happened-It was clearly something paranormal!
It's like the ghost-hunting shows you see on television with the flashlights fixed so that the spirits can easily turn them on or off. The fork was lightly resting on the edge of the saucer so a spirit could easily keep the momentum going at will.
The last psychic I consulted emphatically told me that our house was not haunted by ghosts. However, spirits can be anywhere, anytime and can sometimes manipulate things in the environment.
Apparently, the spirit who moved the fork on the saucer while I was in the process of writing my blog post must have thought that this would be something interesting to add to my post, and I guess it is! Thank you, spirit, whoever you might be!
Thanks for visiting! Until Saturday, August 21, 2021, Becky