The Paranormal-What to Write About?

The last couple of weeks, I've been in a quandary about what to write for this blog post. Usually, there are at least two or three paranormal photos that I've taken in a month's time, but this past month, I've been busy with other projects, so that's why I have nothing to show as far as paranormal photos go.

Just last week, I told Greg that I had no idea about what to write since basically nothing paranormal had happened.

Well, a few days ago, all that changed. Bam, bam, bam! One after another, strange things started to happen. It's just as if the spirits were saying to me, "We want you to know that we are always around even though you may not be aware of us!"

Things tend to happen in three's, and these paranormal occurrences are no exception-

-I had been on an organizing job at someone's house, and I always take my hand soap with me in case I need it since I have very sensitive skin. When I got home, I couldn't find it anywhere, but a few days later, it turned up in one of my carrying cases, wedged among some other things, upside down, and some of it had even spilled out. I never would have put it in the case like that, and I can't understand why I hadn't seen it earlier.

-A couple of days later, I was fixing supper in our kitchen, when I heard a sound behind me that was coming from the dining room. It sounded like some glassware hitting against each other. Immediately, a went to the dining room, thinking the cats were jumping around in there, but there was not a cat to be found! 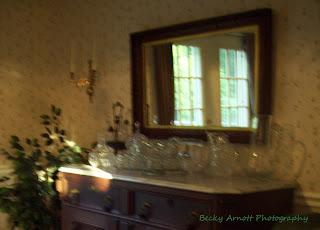 Glassware on Buffet in Dining Room

-Finally, just last night, I was watching a TV show that I really like, so I sat on the coffee table in our living room so I could see it better, so I wouldn't miss anything. Right behind me, it sounded like one of our cats jumped off the couch onto the floor, but when I looked around, Mitzi was sound asleep on the back of the couch, and Kallie was in the dining room, quietly lying on the rug.

A few minutes later, I noticed Mitzi quickly jumping off her perch on the couch. As she looked toward the dining room, she acted like she was stalking something. I thought she was after Kallie, but she wasn't. Kallie had since moved into the living room. Mitzi sat on the floor and intently stared toward the dining room for several minutes. I saw nothing. (Our two cats seem to be very psychic, and they see a lot of stuff we miss. Wonder what Mitzi saw?)

My psychic ability often manifests, of course, when I'm taking pictures. Also, I do sometimes hear strange things, and sometimes I have psychic dreams, but to my knowledge, I have never seen a ghost or a spirit with my own eyes. Keep in mind, however, that it is possible, to see and even talk with spirits that you mistake for real flesh and blood people!

Psychic ability takes many forms, and we're all psychic to a certain extent, but I have no idea what is behind the incidents above which I described. So, in a few days, I might consult with a psychic that does readings, to find out exactly what is going on.

If I found out anything noteworthy, I'll mention it on next month's blog post.

TV fans can go on that site and vote for their favorite TV shows, including the paranormal ones.

Around 90 paranormal shows were listed to vote on. "Ghost Adventures" was number one.

Strangely, some of the most popular shows like "Ghost Hunters" (no. 3) and "The Haunted Collector" (no. 11) have been cancelled. What are these networks thinking?

I think that "Finding Bigfoot" should be ranked higher than 43. In my opinion, that show gets better with every season.

I believe I'll go to that website soon and vote for my favorites. Maybe voting will positively influence the networks to keep showing, and even put back on, the best programs.

Posted by Becky Arnott at 8:35 PM No comments: