Every few days, things happen that confirm for Greg and me that the psychic who toured our house a few weeks ago was correct about several things that she sensed.

During the tour, before we even went upstairs, she said that there was something strange about a room right above our heads.  When we got to that room, which we're gradually turning into a guest room, she pointed to a marble-topped table to which she said a lady spirit was attached.  The spirit had owned this antique table in the 1930's, way before we had acquired it.  When she was alive, she'd have her morning coffee on it, although she had the table sitting to the side rather than in front as you normally would a coffee table.  The psychic said the spirit liked the table where it was placed now in our room.  (That tidbit of info makes you feel a little strange and uneasy, because you hope she's going to like the changes we make to the room!  We'd think twice before moving that table somewhere else.  Of course, this is our house.  Living with spirits is not easy!)

The photo below was taken just a few days ago.  I snapped this photo so that we could take it with us when shopping for paint and additional furniture, etc.  Notice the wisp of ectoplasm on the tea pot handle and the orb in the upper right corner.  Does that mean that there is more than one spirit in this room?  We may have to consult with our psychic again sometime. 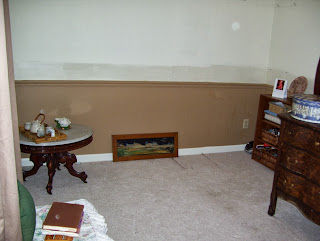 Oh, and by the way, a few minutes after the psychic had left, I went back into that room and detected a strong floral fragrance which was in no other part of the house!

Hope to see you all there!

Thanks for visiting!  until next Saturday, Becky 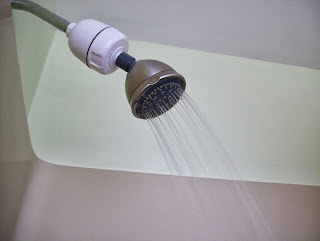 Thanks for visiting!  Until next Saturday, Becky
Posted by Becky Arnott at 4:30 PM No comments: 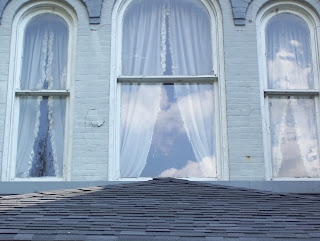 I thought I'd write a post about fear, as it's something that has been on my mind lately.

First of all, in the recent past, because of my husband's old work schedule, I had to be by myself for a while after dark.  You know how that can be.  No matter who you are or what your age, every creaking sound that you hear, you imagine to be someone or something ominous.  This can put your nerves on edge.

My fear became so bad that, as I said in my 9/1/13 blog post, I had a psychic come in and investigate our house.  She assured me that everything would be fine if we got rid of  just one item.  She said to never let spirits know that you are afraid of them.  Although we still have a few spirits in our house that are attached to furniture that we really like, she said that those spirits are not harmful.  Greg and I just decided to co-exist with them, so now everything seems fine.  They're in their world, and we're in ours.  Sometimes we're afraid of things because we don't understand them.

We are all so different in the things that we fear.  For example, taking pictures of spirits doesn't bother me at all.  I think it's just terribly interesting and intriguing.  However, one woman, after quickly scanning through my book, Photographic Encounters of the Spirit Kind , said, "That book's scary!" which surprised me, because I had just written it to document our encounters with the spirit world with words and pictures.

If readers feel that my book is scary, I guess that's a good thing, because it's akin to going into a Halloween haunted house or seeing a scary movie.  Being scared in a safe environment can be entertaining.

What others have said about fear:

-"We fear things in proportion to our ignorance of them."
-Christian Nestell Bovee
-"...-Fear activates the enemy."
-Joel Osteen
-"As a child, I was more afraid of tetanus shots than, for example, Dracula."
-Dave Barry

Thanks for visiting!  Until next Saturday, Becky
Posted by Becky Arnott at 3:00 PM No comments:

Today, I'd like to share with you the earliest-known paranormal photo that was taken by a member of my family.

As I said in my book, Photographic Encounters of the Spirit Kind, I was often the subject in my father's photographs when I was growing up, as evidenced in the photo below.  Just this past week, I found this photo among some things that I hadn't see in a long while.  It was taken by my father when I was a small child in the yard of our old house.  Note the ectoplasm on the left side of the photo.  Used to, we'd say that something was wrong with the film.  Now, we know better. 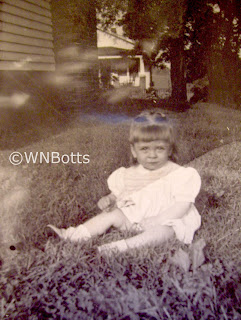 Looks as though my father had the gift of taking spirit photographs.  Most of us do (although some do more than others), and we don't even realize it.

This photo is not in my book and I've never shared it with anyone before.  It is, however, similar to some of those in Photographic Encounters of the Spirit Kind.  If you enjoyed this photo, I believe you'd love my new book.  You can find it at www.amazon.com, www.barnes&noble.com, and www.fastpencil.com.

After you've read my book, please leave a review at either Amazon or Barnes & Noble.  Some other comments have been,  "Awesome!," "terrific", "thoroughly entertaining," "intriguing stories," "fascinating photographs."

Posted by Becky Arnott at 9:48 AM No comments:

A Psychic Visits Our House

Check out my new book, Photographic Encounters of the Spirit Kind, and please help spread the word!  Thanks!

My last two blog posts (please see the August 18 and 24 blog posts), I told about strange things that have been happening at our new house, one thing that could have been hurtful, even potentially very dangerous!

Therefore, I decided to contact someone we know, a psychic, to come for a visit to our house, to let us know what is going on and what we might be able to do about it.

We set up a day and time when Greg and I would both be at home for the psychic (whom I'll refer to as Anne, to protect her privacy) to visit and to give her take on everything.

When Anne arrived, after saying hello, she immediately started sensing things.  She said our living room was merely a pass-by room for spirits, and the dining room had a lot of positive energy.  The furniture in there was fine, but there were three spirits attached to an old corner cupboard, two males and one female which she described in detail, as she sees "dead people," just like on the popular paranormal TV show, The Dead Files.

We were anxious for her to get to our garage where that heavy board fell which I told about in my last two blog posts.  Surprisingly, she didn't sense anything out of the ordinary.  Apparently, our ordering the negative spirit that had caused the board to dislodge by itself and land on the floor below, had worked.  We felt a sense of relief.

However, just when we thought everything was OK, as she approached a room upstairs, she said there was something not right around our study area.  She said there was something about a clock that was not good.  Greg pointed to a clock that was in our study, but she was not persuaded, as she insisted that that was not the clock, that there was another one in a nearby area.  I happened to think about an antique clock that was high on a shelf in a small adjacent room, right off the closet.  It was there because we were trying to decide what to do with it.  I liked it.  I thought it was pretty and wanted to display it, but Greg didn't like it.  Looks like Greg was right, because when I showed it to her, she told us in no uncertain terms to get rid of it!  It was very bad, that the owner was not a nice person.  (All this reminded us of The Haunted Collector, one of my favorite shows.) 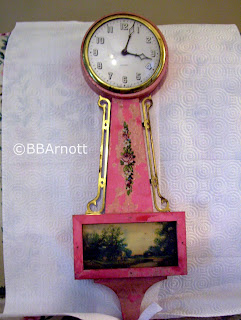 The Pretty, But Not-So-Nice Antique Clock

Just as soon as she left, Greg took the thing out to a distant storage building where it still resides as we're still trying to decide its fate.

She went on to tell us more really interesting tidbits about our furniture and various other areas in our house that I'll include in another paranormal book I'm working on which will probably come out next year.