I lost my mother just a week ago, and I'd like to share with you some of the unusual things that happened surrounding her passing.

Greg and I found out she was really sick, so while we were on our way to see her, a large bird swooped down at our car, near the windshield.  Later, we got stuck behind a truck for several miles which had "casket company" printed on it.

Then, a few days later, I got an email from a family member who said she had lit a candle for Mama since she was ill, but the candle went "out on its own with half a candle left," which gave her an uneasy feeling.

Also, she had a big bird experience, as well.  It was an owl that "hooted loudly" and swooped down nearby a couple of times.  Since it was an owl, it made her feel "uneasy, because in the Native American world, seeing an owl means someone will die."

Then, just a few days after my mother passed on, I started getting positive messages, especially when I'd go out somewhere.  Two of my favorites are, "Love never fails." and "Heaven is better."  All of these spirit messages were so comforting, just what I needed to help me get through all of the pain. 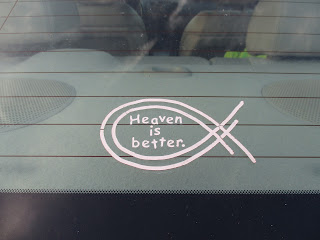 A friend sent me a wonderful email in which she tells about a musical greeting card that her deceased mother had given her several years ago, that suddenly started playing on its own, even though it had been packed away under several things in a box for several years.

The things I have written about above are examples of messages from Heaven, angels, Spirit, God.

For more information and examples, about spirit messages, be sure and check out the intriguing book, "Animal-Speak, The Spiritual & Magical Powers of Creatures Great & Small" by Ted Andrews.  Also, there's my favorite magazine, "Woman's World" which always has the "My Guardian Angel" feature in which readers share their stories about their departed loved ones sending them signs and messages from beyond.

Thanks for visiting!  Until next Saturday, September 5 (or sooner!), Becky
Posted by Becky Arnott at 4:26 PM No comments: