This month, I have a couple of really creepy happenings to share with you. I'm usually not affected by the paranormal things I come across, but for some reason I feel really uneasy about what I'm about to tell you-

Fist of all, a few weeks ago, Greg and I visited an absolutely breathtaking state park here in Tennessee on a beautiful day. This was a place we had never before visited, and we enjoyed exploring around.

It wasn't long until we came upon an old house in which a caretaker of the park had once lived, but it was now vacant since the caretaker had died. I told Greg that if I were the deceased caretaker, I would want to still live here, that I'd haunt this place. It suddenly occurred to me that the place probably was haunted!

Greg suggested we take pictures. Why not, since that's what we so often do, especially since it looked like the perfect place for a haunting!

I took out my camera which I always carry with me when I go out, and started taking several pictures.

Here's one of the typical photos that I took- 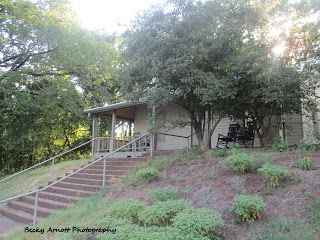 It looks like ectoplasm in the trees above the old house.

Also, I half-jokingly asked any spirits there to start rocking in one of the rocking chairs on the porch, when suddenly one of the plants in the foreground started shaking on its own like the wind was blowing it even though there was no wind, and none of the other plants near it moved. I figured that moving a plant was easier for a spirit to do than moving a rocking chair! Apparently, the spirit wanted us to know that it was there.

Then, Greg asked to borrow my camera (He hadn't brought his.) since he wanted to see if he could catch anything paranormal.

Here's what he got- 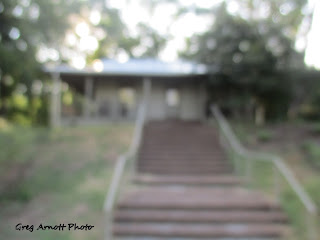 While he was taking pictures, the camera started malfunctioning, and the photos turned out to be blurred. It took him a while to get the camera functioning normally again! I thought maybe the battery had gotten low, but later we were able to take more photos just fine.

Our conclusion is that this area is most certainly haunted! Let's put it this way, I sure wouldn't want to be there after dark!

Another photo in the realm of the supernatural is from my brother, Nick, of his wife, Lisa, and their cat, Whiskers. 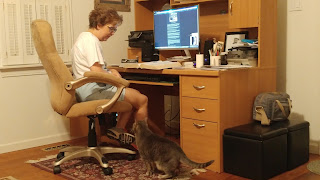 Here is part of the email Nick sent to me, explaining the above photo-

"I'm attaching a pic showing Whiskers going berserk near the computer: Lisa was looking at your paranormal blog and he started jumping around, trying to get to the screen. He has never acted like that before! It's like he sensed something weird going on with what she was reading! Strange!"

(Guess you already knew that animals are very psychic!)

This is strange! Thank you all for sharing!

For much more about the paranormal, be sure to check out my book, "Photographic Encounters of the Spirit Kind," available now, either in paperback or as a kindle download, http://amzn.to/2usXWIO .

Also, if you could use a little more of the positive in your life, you might enjoy my other blog, www.theartofpositiveliving.blogspot.com .

Thanks for visiting! Until Saturday, September 16, 2017, Becky

Posted by Becky Arnott at 5:07 PM No comments: