Questions for the Psychic

Inquiring minds (Specifically Greg's and my minds!) want to know the answer to our questions about several strange happenings around our house, inside and out.

A few months ago, I contacted a psychic who told me about a man who used to live in our house before we bought it that had passed on. According to the psychic, he is still living with us in spirit, and we do believe she was right.

We did a little ritual to try to get rid of him and any others that might be around, but apparently the spirit of the man is still with us. In all honesty, we didn't do the ritual she suggested, but rather another one that was in a book that is good for when you move into a new house. I used it because I already had those materials available, and I didn't want to waste them.

We decided that when we have more time, we need to do the ritual she suggested, and that we need to use a smudge stick that is burning properly. The last time I used it, it was barely burning. Since then, I have fixed it so that it burns the way it's supposed to.

I am the world's best procrastinator, and I have been really busy with my art, working on our house, and working on things for the upcoming holidays so I have neglected getting rid of negative entities since that is just not a top priority for me right now. (Maybe it should be, however!)

Here are some strange things that have been happening the past few weeks, so I have plenty of questions for the psychic:

In September, we had a yard sale, and after the sale was over, we were just playing around and decided to take some pictures- 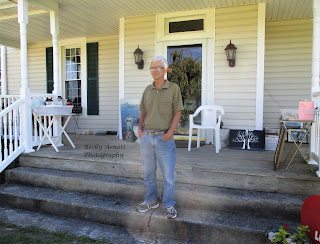 I was a little taken aback to see these large orbs near and on Greg's legs and feet, even after all of these years of taking paranormal photos since I usually don't take pictures just to get strange things showing up in photos. 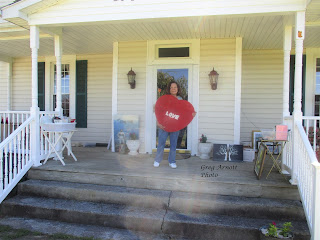 Next, Greg took my picture, and even more orbs were surrounding me! Plus, look at the colored streaks of ectoplasm on the ceiling of the porch! What was going on!
We started putting two and two together, and we decided that at least partially, it had to do with the spirit of the former owner since many of the things that were in the yard sale were his that came with the sale of the house. This included the large heart we found in our cabin that he had apparently made for his wife since he had good carpentry skills.
So our first question to the psychic is to professionally explain the paranormal activity going on in these two photographs.
Also, after we left the porch, we went toward our nearby cabin when we both smelled strong cigarette smoke. We looked around and no one was anywhere near us. We learned from a neighbor that the man who had lived in our house smoked cigarettes!
We'll see what the psychic that I'll call in a few weeks has to say about the phantom cigarette smoke!
Notice also, in the photo featuring me, the window on the far right. A couple of times, when I was in our living room, I noticed out of the corner of my eye, a partial figure of perhaps a man perhaps on the porch quickly passing by the window. When this happened, I quickly ran to the window to look outside, but I saw nothing! Greg was outside in another part of the yard, mowing.
So, I'll ask her what I saw. Was it merely a figment of my imagination, a passing vehicle, or something else?
I mentioned the cabin earlier, and I have written about it before. Here's a picture I took of some stuffed animals in the cabin. They were here when we bought the house. 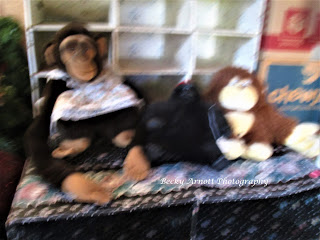 I'm afraid it didn't turn out the way I intended. It is, of course, very blurred, not from the movement of the camera, but from paranormal activity. I tried taking another picture, and it turned out the same way. I got rid of all of my old dolls and stuffed animals after I saw a television show on the paranormal about spirits sometimes inhabiting images of  people and animals.
We're really looking forward to finding out from the psychic what's going on in the cabin since it's apparently haunted, too, which I mentioned in previous blog posts.
I also have a couple of other things to ask her which I'll mention next month. There will probably be even more things, as well, knowing this place!
Be careful!
And happy Thanksgiving!
Thanks for visiting! Until Saturday, December 19, 2020, Becky

Posted by Becky Arnott at 4:43 PM No comments: