"Photographic Encounters of the Spirit Kind"

A couple of days ago, I was in our art room, and as I glanced around the room, I decided to go over to the area where I had my first book, "Photographic Encounters of the Spirit Kind," displayed. 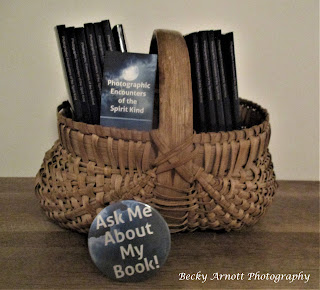 Some Copies of My First Book on Display

I then thought that some people that are interested in the paranormal might not be aware that I have this book for sale that has over 100 genuine paranormal photographs that I, my husband, Greg, and my brother, Nick, and a few other people that we know have taken. 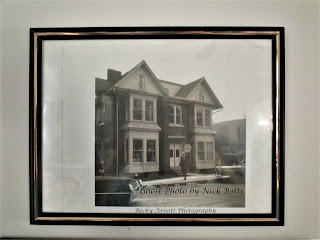 I have a copy of the famous June Tolliver House ghost photo which hangs in our art room. It was taken by my brother, Nick, when he was just a school boy. Everyone in our family thought that it looked like there was a ghost in one of the June Tolliver House windows in Big Stone Gap, Virginia. However, just to make sure, we took it to a locally famous photographer in our area, and after he enlarged and studied it, he didn't know what to think since the ghostly image was still there. Even when it was enlarged to poster-size, the apparent ghost remained!

So, we decided that since we had so many supernatural photos that I should write a book telling about many of them. (Not all of our photos made it into the book since there were so many that they would probably fill a large dictionary-sized book, so we narrowed them down to a few of our favorites.)

And, the photos just keep coming! Some day I may write another book which includes many of the paranormal photos I've featured on this blog, plus others that we've yet to show.

Not only is each photograph explained in the book, but there are also real ghost stories told by people in our region in the book, as well. One of these stories is about a haunted car which one of my former students wrote about and shared with me.

My book features paranormal photographs from my childhood which my father took, (Guess my brother and I got our unusual talent from him!) until recent years. They were mostly taken in our Southern Appalachian Mountain region, but some were taken as far away as Europe. (Boy, is that area haunted!)

There are chapters about ectoplasm, orbs, shadow ghosts, and a few featuring rarely documented images like the ghost in the mirror at one of our holiday gatherings!

To get the Kindle version of "Photographic Encounters of the Spirit Kind" on Amazon for just $2.99, please click the widget above.*

*The paperback version is no longer available for sale.

Posted by Becky Arnott at 2:54 PM No comments: