Another month, another spirit photograph!

A couple of weeks ago, Greg and I went on a little trip to Georgia, and while we were there, staying at a B&B, I took a few photos to document our visit. As we were looking over the pictures I'd taken, we were amazed by what we saw. It looked to us like ectoplasm and orbs among the display of old bicycles, tricycles, and a scooter on the grounds of our B&B! (No matter how many paranormal photos Greg and I have taken in the past, it's still a thrill to us whenever we catch spirits on camera.) 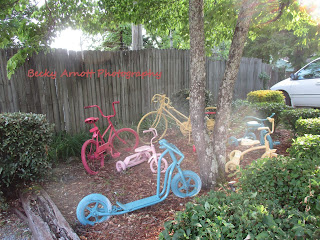 Anyway, I think you would agree that this photo is definitely in the realm of the paranormal!

Thanks for visiting! Until the first weekend in July, Becky

Posted by Becky Arnott at 8:44 PM No comments: