A few days ago, a relative (whom I'll call April) sent me two photographs of her father and her beautiful, large dog. I decided to keep April's identity secret for privacy.

Also, I'm not showing her photographs. Instead, I'll just describe them.

Her first photo shows ectoplasm in the lower right corner. In her second photo, the ectoplasm takes up quite a bit of the lower part of the photograph.

April asked me what I thought about the photos, and although I take paranormal photographs, I'm not an expert on interpreting them. My guess is that the spirit in the photo was attracted to April's impressive dog. Some spirits seem to like being around animals. (Besides animals, spirits can be attracted to some people, celebrations, churches, family gatherings, etc.)

Also, April apparently has the gift of spirit photography.

To my knowledge, I don't know of any other books that have been published that have had that many paranormal photographs in them.

Since my book was published, Greg and I have taken lots of spirit photographs. Here is one of those that Greg took of a pond at night in Middle Tennessee- 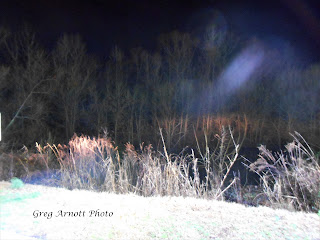 Since the above photo of the pond was taken at night, Greg turned on his car lights to take the picture. That's the reason that the foreground looks bleached out. You can see the obvious ectoplasm on the right side of the photo. The only change I made to the photo was that I added Greg's watermark, and I blotted out two small lights (which were probably street lights) on the left side of the photo. For some reason that pond seems to be very haunted, probably due to any animals and fish that might have died there. (We hope it is not due to something more sinister!) We've taken pictures there previously, before dark, and orbs, etc. showed up then, too.
In fact, we have so many paranormal photographs, that I'm planning to write and publish another book sometime in the future. (Who knows? I might even get permission to add April's spirit photos, as well!)
In the meantime, please check out my current paranormal book which is for sale on Amazon for only $2.99 on Kindle. To order "Photographic Encounters of the Spirit Kind," just click on the widget above.
Thanks for visiting! Until Saturday, May 21, 2022, Becky

Posted by Becky Arnott at 5:15 PM No comments: