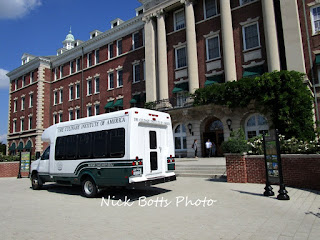 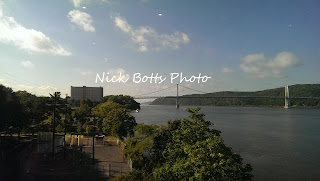 Posted by Becky Arnott at 2:01 PM No comments:

One morning, Greg came in from our front yard, and asked me if I'd noticed that our angel statue was lying on the ground.  I told him that I hadn't.  We couldn't understand why it was lying partly on the sidewalk a couple of feet from where it usually stands.  Because of the position that it was in, there's no way it could just have fallen over or have been blown over by the wind.  Nothing else was disturbed.  We concluded that either Halloween pranks had started early, or that it was something supernatural. 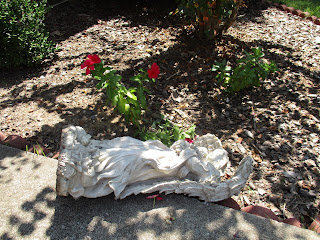 We were really puzzled by this, and I told Greg that I would mention the angel statue to a psychic-medium that I would be contacting in a couple of days.

As I said in my last two blog posts (August 8, 2015 and September 5, 2015), my mother passed away just recently.  I promised her before she passed that I would communicate with her through a psychic, especially since the last few days of her life she couldn't speak.

True to my word, I contacted a really good psychic-medium by phone.  I asked her about the angel statue, and she said that Mama's spirit had tried to move the statue to another part of Greg's flower garden to show us that she was here, visiting us, but it was too heavy for her to move any further.  Now, we understood; the mystery had been solved.

The reading with the psychic went well, and I communicated with Mama, as well as my father who had passed on several years ago.  She also saw my grandmother, and even described what she was wearing.

The next day, I looked out the upstairs window, and noticed a heart-shaped leaf floating in the birdbath on the deck in our back yard.  I mentioned it to Greg and to someone else, and wondered if it could have been from Mama, or was it just a coincidence?  The doubt left my mind the next morning after I saw a second leaf floating in the birdbath, as well!  A statue was too hard to move very far, but a leaf or two was another matter!

Also, another strange thing that has happened involves a pretty mourning dove.  Apparently, the same dove seems to enjoy coming to our deck where the birdbath is, and just either sits or stands on different parts of our deck for hours at a time.  Since this was so unusual, I decided to research this online.

Just last night, I found an intriguing website (www.wisdom-of-spirit.com) that gave me the information I needed.  It had "after death communication" which I found very helpful.  It even mentions "physically occurring afterlife signs" such as birds "who behave in a strange or remarkable way in our presence...."

Also, according to a book that I often consult, "Animal-Speak," by Ted Andrews, a dove represents the feminine, motherhood.

Greg has also received messages from a couple of his loved ones who have passed on.

I'm sure that Greg and I are not the only ones that have received messages from beyond. The above-mentioned website has tremendous information for any of us who are puzzled by strange things that might have happened after the death of a loved one.

I really appreciate Mama's persistence, and her willingness to communicate.  In the past, we always enjoyed talking to each other about a lot of different things, and just because she's no longer on this plane, doesn't mean the communication has to end for us, or for anyone who wants to continue  relationships with those in spirit.

***To celebrate Halloween this month, I'll have a very special blog post on Friday, October 23, 2015.  It concerns a photo my brother took that is mind-boggling!  That blog post will be the first time it has ever been shown anywhere.

See you then!  Becky