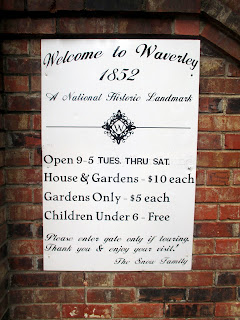 A few weeks ago, Greg and I got to visit a beautiful historic, antebellum home, Waverly Mansion, in West Point, Mississippi. A visitor can tour the home just for its beauty and historic significance, or do like Greg and I did, tour the old plantation house from a mostly paranormal perspective. 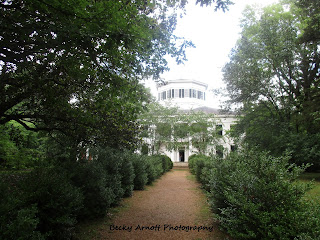 Right off, before we even entered the home for our tour, we noticed the ectoplasm around the cupola in this picture I'd just taken. That alone told us that this place was really haunted!

Also, notice the ectoplasm in the upper left-hand part of the photo (below) of the trees on the grounds of the mansion. 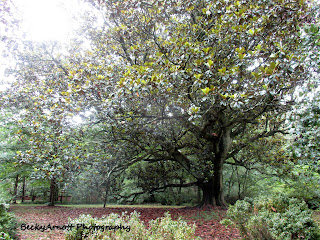 Our tour guide, Jimmy, along with Midnight the cat and Talula the dog met us in front of the house. 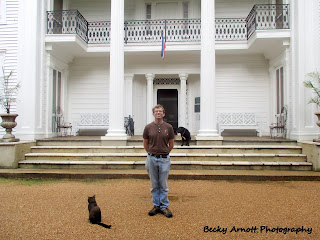 The interior of the house is quite impressive. 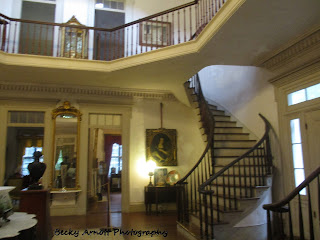 According to Jimmy, one of the ghosts haunting Waverly is that of a little girl, Cynthia Hampton, who fell to her death on this stairway. 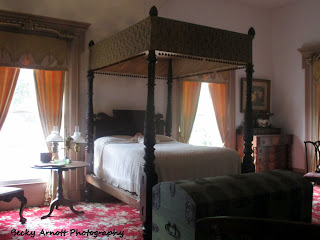 Little Cynthia's ghost has been seen lying on the bed in the red room (above) by a least one visitor. 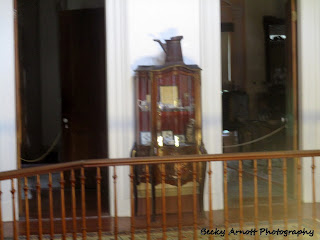 Notice the ectoplasm on the right side of the railing which is just outside the red room. 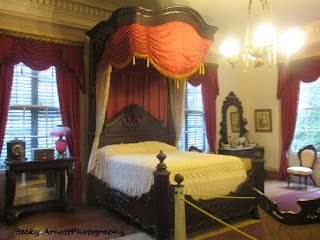 A woman who lived in this house died in this bedroom. Her ghost was seen by another tour guide walking from her bedroom toward the front door. Instead of using the door, she simply walked through the wall! 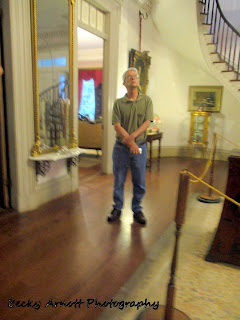 Greg is standing in the very same hallway where the woman's ghost was seen walking from her room toward the front door. 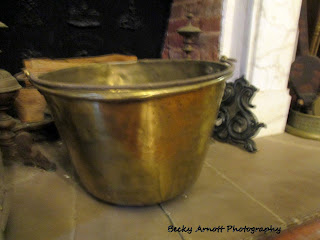 A previous tour guide saw this brass bucket move several times on its own. It was twirling, etc. 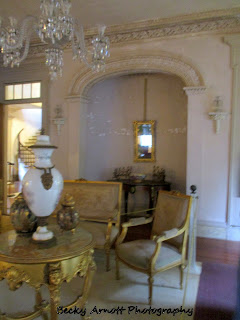 Notice the obvious ethereal pastel-colored ectoplasm in this photo. It was in this area that the family had baptisms, weddings, wakes, and funerals. With all of the emotion associated with this area, no wonder there is ectoplasm there! 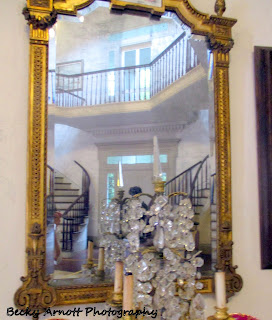 The reflections in this mirror look pretty creepy, but I'm not sure if it's just light from the windows, or ectoplasm. (However, it was pretty dark outside that day due to rainy conditions, and it was late in the afternoon so I don't really believe it was due to the lighting conditions.)

My only disappointment was that I wasn't allowed to use the flash with my camera. If I had, I'm sure I could have captured more weird things like grids in the many mirrors there.

(I discuss and show grids along with many other psychic phenomena in my book, "Photographic Encounters of the Spirit Kind" which can be ordered from Amazon or from the widget above.)

There are several more ghostly stories about this very haunted place, but I'll leave those for you to discover for yourself!

More interesting facts about Waverly Mansion-
-The name Waverly came from Sir Walter Scott's novel, "Waverly" which was in the library at Waverly Mansion.
-The mansion has been featured in "Home and Garden" magazine and on "Larry King Live," among others.
-"TripAdvisor gave Waverly Mansion a "Certificate of Excellence."
-Greg and I found out about Waverly from a DVD entitled "Hauntings in America" that I had given Greg as a gift.
-Our tour guide, Jimmy, said that in all the years he's been giving tours there that he has never seen or heard or felt anything strange. (Which is probably a good thing!) Even when some ghost hunters were there and noticed that the temperature quickly dropped in one area of the house, Jimmy said he didn't feel anything.

Greg and I would like to thank Jimmy for being an excellent tour guide which made our visit there very memorable!

Posted by Becky Arnott at 6:25 PM No comments: