This blog post is special because special family members sent me some very intriguing paranormal info.

First of all, my brother Nick and his wife Lisa went on a trip to Key West during the winter. (Everyone should be so lucky!)

They stayed in the Marrero Guest Mansion which is "one of the top haunted sites in Key West," according to my brother. 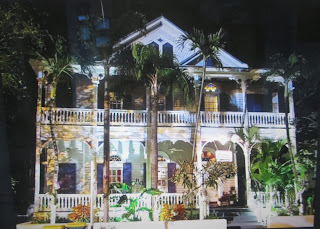 And, their room was "the most haunted place in the house." 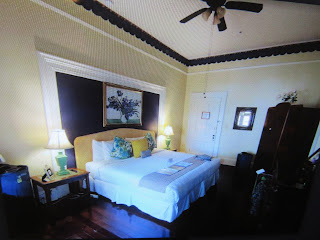 Nick's Photo of the Haunted Room

They took a ghost tour in which they learned that this mansion was "a hot spot of paranormal activity." Nick on to say that a lady who formerly lived there used their room as her bedroom, and her apparition has been seen walking near the bed!

Nick and Lisa spent two nights there. (That was brave!) The first night they heard something fall in the floor after they'd gone to bed. Nick said that it turned out to be a shopping bag that had fallen from the top of a chest of drawers for no apparent reason. The second night, they heard "creaking sounds, like footsteps, on the old wooden floor" in their room again after they turned off the lights. Lisa sat up in bed and felt as if though "someone was walking around the room near her side of the bed."

Nick went on to say that they read about "other guests experiencing similar occurrences." He said that YouTube has some good videos of investigators trying to capture some of  these sounds.

They were lucky to have come into contact with this paranormal activity which not very many get to experience.

Another family member, our sister-in-law Cris, is really into the paranormal just as we are.

She recently sent us an interesting article that was in the "Times Free Press" about a ghost in a room at the Read House in Chattanooga, Tennessee. The reporter for the newspaper wrote an article about him and his wife who spent the night in the haunted room, but nothing happened that night even though they tried to encourage interaction between them and the ghostly entity wherever it might be.

You just never know about a place that is haunted. The spirit world is so unpredictable! The spirits appear, make contact, etc. when they want, not when we in the "real" world want them to!

Cris recommended a terrific book for Greg and me. And, I recommend it to all of you. It's called "True Tales of Ghostly Encounters" by Andrew Honigman who compiled and edited the stories. I got it on Amazon for only $7.00.

Thanks, guys, for sharing your intriguing stories and photos. Keep up the good work!

Posted by Becky Arnott at 12:57 PM No comments: