It's good to be back with you!

A lot has gone on with me, paranormal-wise, as it usually does, but I'll mention only a couple of the more outstanding things on this post.

The two paranormal events that I've just recently had, involve my computer.  Both times, I was trying to email people. 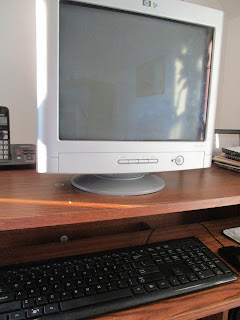 The first time, I was emailing a relative, and we were making plans for Greg and me to meet her and her husband and another couple at a haunted inn in North Carolina to spend the night.  However, right in the middle of my email, some of the keys stopped working, including the space key!  I finally ended up capitalizing the beginning of every word and using words that didn't contain certain letters since those didn't work.  I finally got my message across, thank goodness, but it took a lot of creative typing!

Then, the second email was to my brother, to thank him for the copy of a paranormal photo that he had sent me that he had seen on Facebook that a woman in his church had taken before dark in an old graveyard.  What is significant is that she actually saw the reddish ectoplasm before she snapped the picture.  (None of us has ever done that.  For us, the paranormal stuff just shows up in the photos after we've taken the pictures.)  Anyway, for this email to my brother, I had a hard time just trying to get the email sent, but persistence prevailed!

Greg and I are going to go check out that graveyard ourselves the next time we go that way.  I'll let you know if we find anything significant there, or in North Carolina!

So, the question is, is our computer haunted?  Were the two events actually paranormal?

Another thing to consider is that the planet Mercury is retrograde right now (May 18-June 11).  When this happens, strange things can happen with technology, communication.  Maybe that's what happened, but I think it's very significant that both times that I had problems, I was discussing the paranormal.

P. S. - My book, "Photographic Encounters of the Spirit Kind, " is now on Kindle!

Thanks for visiting!  Until Saturday, July 4 (or sooner!), Becky
Posted by Becky Arnott at 6:00 PM No comments: