A Haunted B&B, and More

Every month, Greg and I are still amazed by the paranormal activity that we capture on film.

Last month was no exception.

In September, Greg and I took an overnight trip to visit family. Before we left, on the spur of the moment, I decided to take a picture of our large poke plant. When we looked at the photo, we noticed immediately that there was ectoplasm in at least a third of the picture.

Little did we know that this was apparently a little preview of things to come on our trip!

We stayed at a B&B that was a turn-of-the-century Queen Anne's cottage. It was quiet charming, up to a point.

We really loved our stay there although we kept hearing strange noises during the night. I woke up several times to sounds that seemed like they were coming from one corner of our room. Greg heard a weird noise that sounded like it was right behind our heads while we were in bed.

Nothing showed up in photos I had taken inside the old house that night, but the next morning was a different story. Three pictures I had taken outside on the porch had different types of ectoplasm in them.

The best of the three appeared to have a foggy look, plus there was ectoplasm near two old bicycles, there were weird steaks,etc. in the window and in the glass door., and in the lower right-hand corner of the photo was a bright pink color that looked almost like blood running down off the porch. 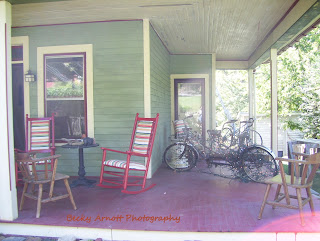 I showed the photos to the owner who told me that he and one or two others had heard and even seen some paranormal activity there as well. I do believe that to be true!

We've stayed in several B&B's most of our married life, and a few of them have been haunted. Our first one was in St. Augustine which I wrote about in my book, "Photographic Encounters of the Spirit Kind" which is available both on Amazon and Fast Pencil.

Our sister-in-law Cris told us about two paranormal TV shows she really likes, "Ghost Asylum" and "Haunted Case Files," on "Destination America." We don't currently get that channel, but now, we're thinking about it.

Thanks for visiting! Until Saturday, November 5, 2016, Becky

Posted by Becky Arnott at 9:48 PM No comments: