One day on my way to a shopping center, I saw this man beside the road, playing hauntingly beautiful music on his horn. I was very lucky that day since I'd never seen him before, and I've never seen him since. 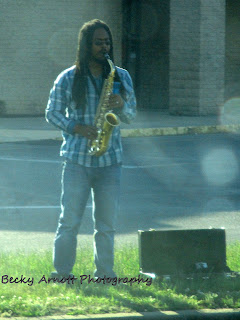 Apparently, I'm not the only one to appreciate his talent, as you can see in this photo I took of spirits gathered around him as he played. Pretty music attracts spirits, unlike some of the crummy junk nowadays that's tries to pass as music.

I had no idea that spirits would show up in this photo. I was just taking the picture because it's unusual to see something like this in the town where we live. Also, I was, at the time, preparing to write a blog post about the arts on my other blog, "The Art of Positive Living," and I decided to use a similar photo without the spirits in it.

I'd gone for several weeks, not getting any spirits in my photos, but I believe I captured this one since I'd been meditating for a few days before which helps to make me more psychic. I don't often take the time to meditate, but I really need to, not only to be more psychic, but to help my over-all sense of well-being. Guess I'll just have to make a reminder note to work it into my busy schedule!

Thanks for visiting! Until Saturday, September 3, 2016, Becky
Posted by Becky Arnott at 8:40 PM No comments: