Strange (Paranormal?) Things in the Sky!

Last week, I mentioned that I was going to share with you the results of a psychic reading, but I still haven't gotten to do that yet. However, I feel sure that I'll get to share that with you for our next regularly scheduled "Spirit Photographs" blog post on Saturday, April 15.

In the meantime, never fear, I still have something else paranormal to tell you about that happened several days ago.

One morning, I looked out the kitchen window and noticed several jet trails crossing over each other. I told Greg, and he grabbed his camera and took the photo below. 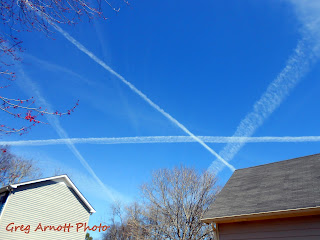 This is weird because normally contrails don't hang in the air that long, nor do several cross over each other in that manner.

Even stranger is that when Greg got to work later that day, he said that he saw a lot more of these contrails in the formation of a grid!

But wait, even more weird was the fact that when Greg got to work the very next day, he looked out the window and saw something else strange in the sky. He grabbed some nearby binoculars, and he and a coworker ran out to see what it was.

Greg said that there was an object up high in the sky which was the size of somewhere between that of a hang glider and a small plane. It was shaped like a peanut, and it was white and sparkled in the sun. Suddenly, it started twisting and turning, and then it changed into a triangular shape, and finally disappeared.

Greg and his coworker didn't know what to think about this strange phenomenon. They were stunned. The coworker said that he'd never before believed in UFO's, but he might just change his opinion after seeing that!

Please stay turned for more of the unexplained!

Thanks for visiting! Until Saturday, April 15, Becky

Posted by Becky Arnott at 7:41 PM No comments:

Questions for a Psychic

I had hoped to have a post about answers to the questions that I had asked one of my favorite psychics, but so far I've been unable to get in touch with her. I'm going to try again next week, and if I'm successful, I'll tell you about her psychic reading either next Friday, March 24 or Saturday, March 25.

Some of my questions are:

-Is my husband's workplace haunted?
-What is it that our cats see in the living room and in the adjacent hallway at night that we can't see?
-What are my loved ones who have passed on doing now?

Please stay tuned for the intriguing answers to these and other questions. She's a psychic medium, so this post should be really good!

Thanks for visiting, Until next time, Becky
Posted by Becky Arnott at 9:12 PM No comments: