For photographic proof, see the photo below- 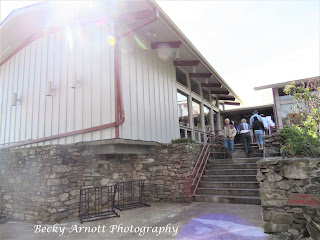 Just look at the various colored orbs and ectoplasm in this picture of Greg coming down the steps at the Pisgah Inn at Mount Pisgah. Not only that, notice the purple color in the foreground! The only other place that I remember this color-on-the-ground phenomenon was some pictures that we took at the Nashville Zoo, and that was several years ago! The color then was a rose color instead of purple, and the shape was more rounded.

Greg was the subject in this photo, of course, but the photos at the zoo were the ones that Greg took of me.

I have another North Carolina haunted story.

Again, on my other blog, "The Art of Positive Living," I wrote a post entitled "Celebrating Twice" on 9/2/18 in which I told about our trip to the Southern Porch, a restaurant in Canton, North Carolina. 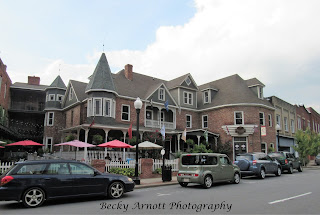 While there, I mentioned to one of the workers that I had heard that the restaurant was haunted. She told me that she had personally not seen anything, but that one guy that worked and even lived there had heard some very strange noises while he was in his apartment when no one else was in the building. That is one very brave man, in my opinion!

Food for thought: How many of us would live in a similar situation?

Thanks for visiting! Until Saturday, December 15, 2018, Becky

Posted by Becky Arnott at 9:12 PM No comments: