Supporters of the Paranormal

Here, at year's end, I'd just like to express my appreciation to all of you who have supported this blog and my new book, "Photographic Encounters of the Spirit Kind."

Speaking of "Ghosts of the Gap," I'd especially like to thank the wonderful paranormal group who does ghost investigations for people around the Southwest Virginia, etc. area, the Black Mountain Paranormal Society.  I met some of the members at my Big Stone Gap book signing and worked with them during the "Ghosts of the Gap" event.  This spiritual group has been very supportive of both my blog and book. 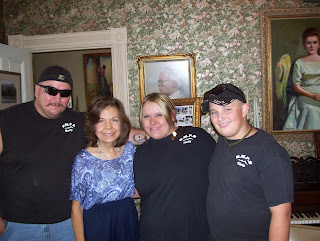 Me, with a Few Members of the Black Mountain Paranormal Society

Check out their interesting Facebook page, and videos on You Tube!

Thanks for visiting!  Until next Saturday, Becky
Posted by Becky Arnott at 4:26 PM No comments:

Glenn Gannaway, a writer for "The Post" newspaper in Big Stone Gap, Virginia, wrote an interesting article about my book, "Photographic Encounters of the Spirit Kind."  I'd like to share excerpts from that article with you on this blog post.

"(Becky) Arnott's sensitivity to the spirit world goes back to her childhood, when she and her brother were afraid to go upstairs, in their...Big Stone Gap home...They found out later that someone had died upstairs.

Arnott's previous home in (East Tennessee) was also haunted, she said: 'we just can't seem to get away from these things.'

The book is compiled from about 80 photo albums.  Arnott went through all the albums methodically to see if she could pick out anything suggesting paranormal activity.

...her book includes about 110 (paranormal) photographs and some text in 105 pages.  Included are pictures taken in the British Isles...

...ghost stories are included in the book, including the notorious story of the ghost that was photographed in a window of the June Tolliver House by her brother Nick when he was a schoolboy...Arnott has...interviewed several people about their Tolliver house experiences...Arnott said, 'I have eyewitnesses, people who have seen things and heard things.' "

Get your copy of "Photographic Encounters of the Spirit Kind" now for only $12.95.  (You can order from Fast Pencil at the top of this blog post.  Thanks!) 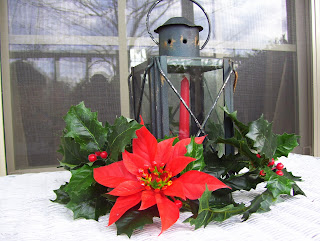 Thanks for visiting!  Until next Saturday, Becky
Posted by Becky Arnott at 4:45 PM No comments:

I recently had a couple of scary incidents at our house which left me shaken.  When the incidents occurred, I was all alone except for our two psychic cats Kallie and Mitzi.

During the first incident, I was in the kitchen, playing with Kallie while Mitzi was resting on our kitchen chair.  Suddenly, with no warning, Mitzi bolted off the chair and raced up the stairs to the second floor.  Afterwards, Kallie ran into the dining room, stopped, and just stared into the adjacent living room, like she was looking at something.  I was so taken aback, I just stood there, trying to decide what to do.  I wasn't sure I really wanted to know what Kallie saw which must have been the same thing that Mitzi had apparently heard.  I did nothing and things soon returned to normal.  Later, I wished that I had been brave, had gone into the living room, grabbed my camera on the living room couch, and had taken a paranormal picture that I could have put on this blog post. 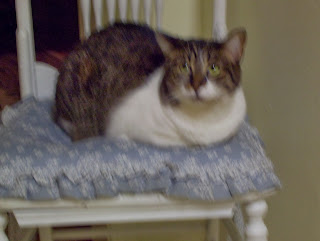 The next night, I was on the third floor, gathering some Christmas decorations to use the next day.  Suddenly, I heard a noise behind me.  I turned quickly around and saw nothing.  I glanced at Kallie who was lying on the window seat.  She was staring right toward the area from which the noise had come.  I quickly gathered my items and left. 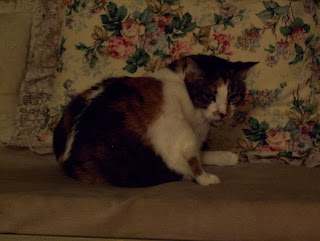 My observations about the two above scary incidents are:

Regarding the first incident, I remember our psychic next door telling us that our living room was a pass-through for spirits.  It's anyone's guess as to who the spirit was or why it was there, assuming it was a spirit that the cats seemed to detect.

Ever since we've been in our new house, I've never liked going to the third floor.  It makes me feel uneasy, although our psychic said we had nothing to fear in that area.  Besides, she told us to never let them know we're afraid.

What gets me is that unless you're psychic, you really don't know whether an entity that you come into contact with is your deceased  grandmother or an evil entity that could even pose as your deceased grandmother!  However, on a TV show one night, I thankfully heard that most entities are not evil.

For more scary stories and actual paranormal photos (over 100!), pick up a copy of my book, "Photographic Encounters of the Spirit Kind" by me, Becky Arnott.  It's a bargain at $12.95!  Thanks!

Thanks for visiting!  Until next Saturday, Becky
Posted by Becky Arnott at 5:34 PM No comments:

You can now view my paranormal video on YouTube! Check out this one in case you haven't seen it.
http://youtu.be/xNW869WNblY
Posted by Becky Arnott at 10:06 AM No comments: