I have written several blog posts about our unfinished cabin, and now, here's another one about our cabin! 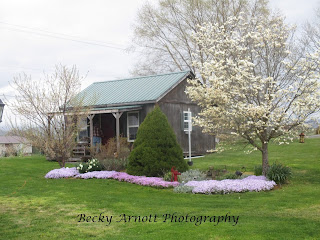 This is my latest cabin photograph. It looks harmless enough.

As I've mentioned previously, I believed that our cabin was haunted because of some of the ectoplasm that showed up in some of my photographs, taken both inside and out. Also, a psychic that I consulted by phone said that she thought that the cabin was actually built on top of a slave graveyard!

Since the cabin is unfinished, so far we have used it only for storage and for yard sales.

The past ten days, it has been the temporary home for one of our cats, Kit-Cat, a stray that we've been feeding. Kit-Cat had to have emergency surgery, so we let it recuperate in our cabin. 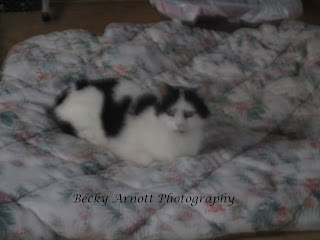 Here (above) is a photograph I took of Kit-Cat on an old comforter inside the cabin. The photo looks a little blurred. I was disappointed that the image was not sharper, and it was too dark. I obviously did not use a flash. I usually don't use one as I prefer existing-light photos. The only thing I changed about the photo was adding my watermark. 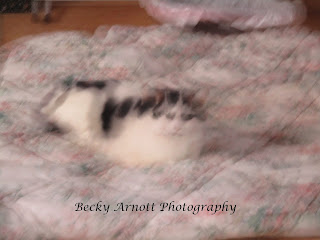 This second photo (above) is much lighter (I didn't use a flash on this one either!), and it's a lot more blurred than the first one. Here, again, I just added my watermark.
Actually, I took four pictures. The first one was light and very blurred, the second one was dark and slightly blurred, and the ones above are the third and fourth photos.
While I was taking the pictures, I felt very frustrated because when I tried to push the button down on the camera, it hesitated on taking the picture at least a couple of times. Maybe it was because of the low light. I don't know. Perhaps it was something else! Was something messing with my camera?
Anyway, I was somewhat perturbed that the strange photos might be because of something paranormal. I was especially upset because of the fact that before we put Kit-Cat into the cabin, I smudged the cabin using a sage smudge stick, and demanded that any negative, evil entities leave the cabin forever. In fact, I told them to leave our entire property immediately! I said that only positive, good entities would remain. I also sprinkled salt in all four corners of the cabin to further get rid of any negative energy!
Good news! Today, Kit-Cat got out of the cabin, and went back to her normal life just outside our house, in the yard that she apparently loves. She seemed fine, better than ever. I thought about the blurred photos, and decided that the camera may not have operated properly because of the low light, or maybe because there were some helpful, healing spirits that were there with Kit-Cat, helping her to recuperate, because after the first couple of days of her being in the cabin, she seemed to settle down, and she did just fine. She even seemed to thrive.
Positive spirits are very acceptable, but, of course, the negative ones are not!
So, is the cabin haunted or not? The best I can tell is that positive energy is all that remains there. So, a happy ending for us all!
For more true stories about the paranormal, both in the United States and abroad, please check out my book, "Photographic Encounters of the Spirit Kind" on Amazon. Just click on the widget above for more information.
Thanks for visiting! Until Saturday, May 15, 2021, Becky