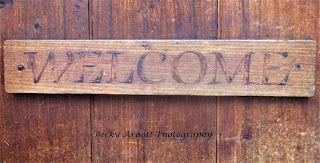 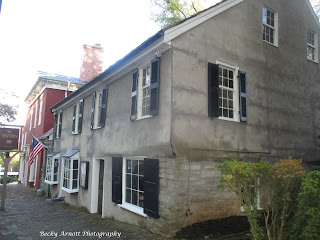 which has The Tavern that is the oldest historic building in Abingdon. The Tavern dates back to 1779, and in its long history, it has been many things, an inn, a post office, a private home, a bakery, as well as several other things including a hospital for both Confederate and Union soldiers during the Civil War.

Oh, and did I mention that it was also haunted!

One evening, we stopped by The Tavern for dessert which was delicious... 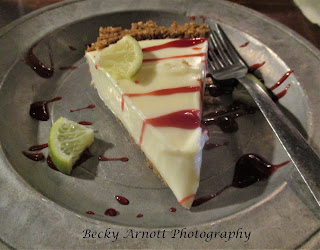 Afterwards, we got permission to take pictures to see if we could capture any paranormal activity with our cameras.

Before we got started, we talked with our server, Allison, to see if she knew anything about the ghostly goings-on there. She told us some very strange things that had happened to those that worked there-several had been touched, strange noises had been heard (voices, walking), etc. She said that a woman had been murdered in one of the upstairs rooms which was supposed to be the most haunted room in the building.

Also, there is even a video of a chair moving by itself. (There are several great videos on YouTube about The [haunted] Tavern.)

Here are some photographs that Greg and I took: 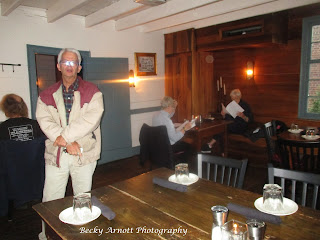 The photo above is of the room where the murder took place. It is supposed to be the most haunted one in the building, but we found only one orb in this room in the four or five photographs that we took of it. The orb is on the wood to the upper left of the woman in the far right of the photo.
Here's a close-up of that orb- 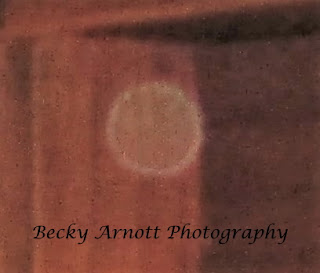 Orb in the "Most-Haunted Room"

Could this orb (above) be the spirit of the woman who was murdered in this room? Is she watching people as they dine, etc.?

Afterwards, we went into the adjacent room which seemed to have a lot more paranormal activity going on, at least for that night.

I took about four pictures in that room, and they were all blurred, which shows that something, like paranormal activity, was interfering with my camera!

Here's the best photo of the bunch in that room- 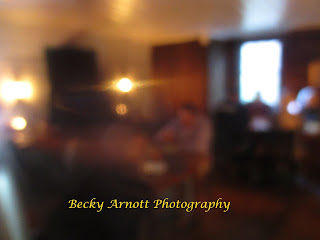 A few of these anomalies are actually lights on the walls and reflections, but some of these show ghostly activity. For example, notice the ectoplasm in the bottom left corner and the strange-looking orb near the center of the photo. 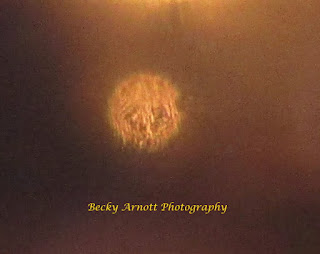 Close-up of the Strange-Looking Orb
We concluded that this room was the most haunted one that we photographed at The Tavern. We found out later that the Civil War hospital was upstairs which, we think, contributed to much of the paranormal activity in this room.
As we were leaving the upstairs, to go back down, Greg snapped this photo of the stairway- 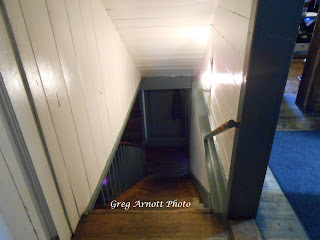 Notice the small violet bit of ectoplasm to the left of the steps. Violet is a very spiritual color. 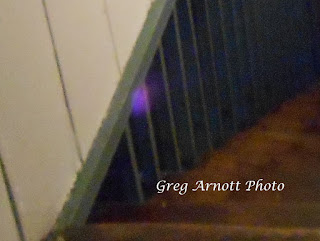 Enlargement of the Previous Photo

Yes, Greg and I will have to agree, The Tavern is definitely haunted!

Why don't you check it out for yourself!

For more on the paranormal, I've written a book, "Photographic Encounters of the Spirit Kind" in which I show many photographs that Greg, other people, and I have taken of many different places, including Europe, of paranormal activity.

To order, please see the widget above.

Posted by Becky Arnott at 10:58 PM No comments: