I don't often react to any paranormal photographs that Greg or I take, but on this post, I'm going to show you a photo that is, in my opinion, very weird, even scary!

Here's some background first, before I reveal the strange photograph-

Greg, some of Greg's family members, and I recently went to four cemeteries in East Tennessee to put flowers on some family graves.

A couple of people couldn't come and take part in our cemetery excursion, including Cris. Before our trip, she emailed Greg and me and encouraged us to see if we could get pictures of any orbs. I thought that was a good suggestion, that I really hadn't even thought about taking any paranormal photographs which seems strange since I have even written a book, "Photographic Encounters of the Spirit Kind," which is about the paranormal photographs that Greg, my brother, and I have taken in the past.

(My book is available on Amazon Kindle. Please click on the widget above for more information about ordering it.)

Most of the time, I don't purposely try to take any weird photos; they just happen when I least expect them to. However, mainly for Cris, Greg and I actually tried to capture some spirit images on camera, and we were successful, beyond our expectations!

We did get some ectoplasm and even orbs in a few of the photos, but one photograph was unlike anything we have ever seen! And, here it is!- 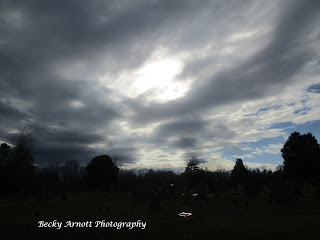 The only thing that I did to the above photo was that I added my watermark. It looks as though it's late in the day, but it was actually only about 3:00 PM! Notice the glow at the bottom of the photo.

I wanted to see the photograph better so I lightened it- 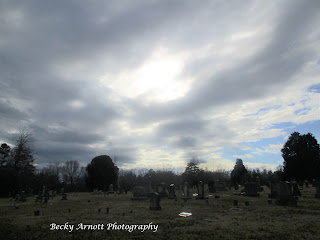 Unbelievably, it looks as thought the nearest gravestone and a few others are outlined and glowing!

Still not satisfied, I lightened the photo even further, and here's what I got- 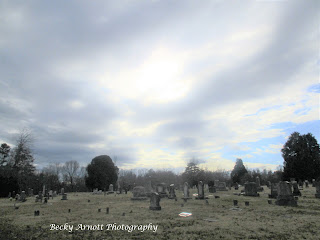 With a mostly cloudy sky, the above photo is how the photo should have looked at 3:00 PM to begin with. Notice that the gravestones still have that glow even in the lightened version.
I emailed the photos to Cris, and she said, "Wow! those are some really weird pictures....I knew you would find something." (Thanks, Cris for your great photo suggestion!)
The photos of the glowing markers were probably dark because of the paranormal activity. Entities can mess with your camera. Another photo that I took earlier was light and very blurred.
Also, a wonderful psychic that I consulted while writing my book said that anytime you saw something glowing that was not supposed to be glowing, it was a sign that there was paranormal activity.
Greg and I are going to be really brave, because in a week or so, we're going back to this same cemetery by ourselves, to see if we can capture anything else on camera. Also, I'm going to consult a psychic to get her ideas about this strange phenomenon.
Stay tuned! More to come about this weird, scary photo next month, plus more!
Thanks for visiting! Until Saturday, February 19, 2022, Becky

Posted by Becky Arnott at 2:54 PM No comments: