This is a very special blog post about a very special place in Franklin, Kentucky, Octagon Hall. It is steeped in Civil War history, and it is also very haunted! 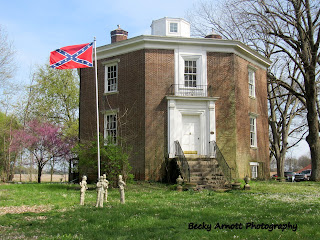 According to the Octagon Hall brochure, "It has been featured on A&E, Travel Channel, Syfy Channel, History Channel, and others." Also, it "has been visited by over 250 Paranormal Teams." The popular "Ghost Hunters" television show featured Octagon Hall during season 9.

The reason that Octagon Hall is so haunted is because of tragedies that happened to the Caldwell family that once lived there. It's also haunted because of the slaves that lived on the property. In addition, Octagon Hall has ties to the Civil War. Some soldiers even died there.

I must say that it is one of the most haunted places that Greg and I have ever visited, and we have plenty of paranormal photos to prove it! Over half of the photos that we took there have a least some ectoplasm in them.

Here's one of the first photos I took on our tour featuring our guide, Debra- 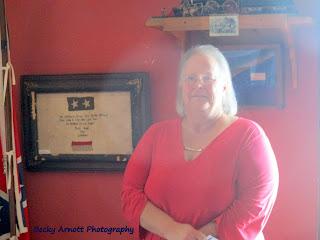 We knew we'd be successful getting more paranormal photos that day at Octagon Hall after I captured this large orb on camera.

Debra told us some very interesting stories about the house including the fact that the piano in that very room (above) was haunted.

We also found out that there are different entities that come and go as well as the regulars like Mary Elizabeth, a young girl who tragically died when her clothes caught on fire at the fireplace in the basement kitchen. 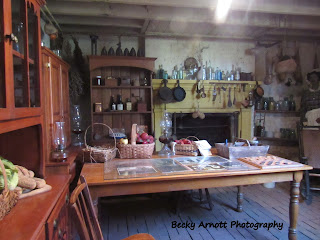 Notice the ectoplasm in the upper part of the photo. There is also some ectoplasm on the wall beside the fireplace. I couldn't believe it when I saw a YouTube video of this same room that had some ectoplasm similar to mine. 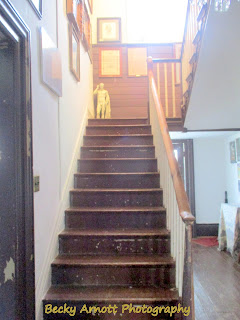 We were told that a small boy, who fell down the stairs and died, haunts this place. We aren't sure if these are the steps, but nevertheless, there's a large orb on this stairway.

Greg and I had about the same number of paranormal photographs of this place, and here are a couple of Greg's- 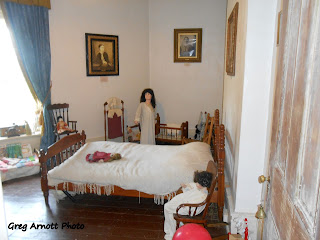 Notice the white glowing ectoplasm in the picture hanging on the wall on the right. 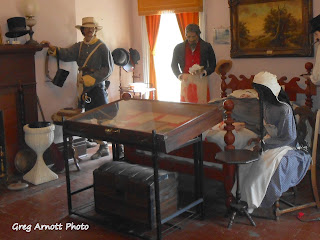 These costumed figures add to the creepiness of this place, and I believe they help attract the spirits that are there. 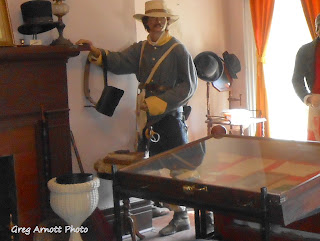 I cropped off Greg's photo to better show the ectoplasm that is on this figure. Notice the white ectoplasm on his body, and also right above the boot. As I was researching more today to write this blog post, I found out from a video that one Confederate soldier who had been with General Morgan's group had been wounded in the foot. He died from his wound in that house after he took off his boot. Could the ectoplasm in this photo be related to that? When I first saw the photo, I thought it was strange that ectoplasm showed up near the boot like that. Might the Confederate soldier ghost be attached to this figure? 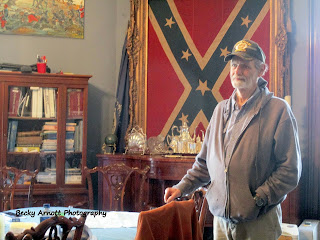 This is Billy Byrd, the Director of Octagon Hall. He has been there for 18 years.

Barry (Bear) Gaunt is a volunteer who is there quite a bit. He has a paranormal research group, "Night Stalkers" that investigates "Hauntings, UFO's, Abductions, and Strange Creatures" according to his business card. See nightstalkersparanormal.org for more info.

Barry said that whole area for miles around had a lot of paranormal activity because it's on the 37th parallel.

The three people I featured today on this blog were very hospitable and knowledgeable, and they have seen and heard a lot, especially at Octagon Hall. They do have stories to tell about all types of paranormal phenomena there. Besides ectoplasm showing up in photos and videos, they have also seen shadowy figures and have heard voices and strange noises both inside and outside of the house. 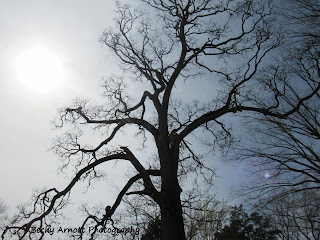 It even looks scary on the grounds of Octagon Hall! Notice the orb in the lower right side of this photo.

If you enjoy history or the paranormal, you'd love this place.

You could take a tour like Greg and I did, or you could even go on an Octagon Hall ghost hunt with Syfy's "Ghost Hunters," Steve Gonsalves, Dave Tango, and Bruce Tango on May 26, 2018, if there's still room. Should be very entertaining for those who are brave enough!

For more of Greg's and my paranormal photos, you might enjoy my book, "Photographic Encounters of the Spirit Kind" which is now available either in paperback or as a kindle download on Amazon.


Posted by Becky Arnott at 7:59 PM No comments: