On this blog post, I'm featuring my husband, Greg, who recently revealed to me several interesting paranormal incidents or phenomena that he had experienced.

A few days ago, I mentioned to Greg that I didn't really have any significant paranormal experiences or photos to share on my "Spirit Photographs" blog this month, and I casually asked him if he had seen or heard anything strange lately, either at home or at work. I was amazed when he told me of three incidents that had happened as long as a year ago that he hadn't before shared with me.

He said that the most recent paranormal event happened at work. (Greg, as well as others, have seen and heard strange things there before, since that place is apparently very haunted due to the fact that it was the site of a horrific battle during the Civil War.) Greg said that a chain that goes across a handrail started shaking on its own. He had never noticed the chain shaking before. However, the rope across from it wasn't shaking at all! (This reminds me of the plant that shook by itself in my last 8/19/17 "Spirit Photographs" blog post, "Haunted Caretaker's House, and More!".)

Another strange incident that Greg revealed happened around a year ago. One day he was in the hallway of our house. As he walked past our front door which happened to be open, the storm door handle suddenly started moving up and down by itself for several seconds!

Finally, the last paranormal event is apparently ongoing. Greg said that several times he noticed something like ectoplasm floating around our living room lampshade! This phenomenon occurs late at night while most of the lights are off. This is unusual for us since the only ectoplasm we have ever seen in the past is in our photos, not with our naked eyes.

I started wondering what was going on with the lampshade, and then I happened to remember what a psychic medium that I had contacted after my mother passed away had said. She told me that my mother's spirit likes one of our lamps. At the time of the reading, I had thought that it was probably the pink antique lamp which we have upstairs that she liked, but now I know it is this one with the ectoplasm which used to belong to my mother.

I have yet to see the floating ectoplasm although I looked a couple of times. I'll let you know in a future blog post if and when I eventually see it myself. 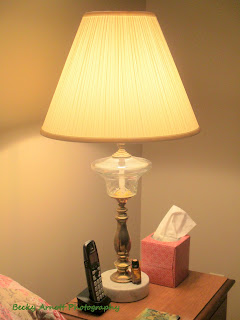 Lamp As It Normally Looks 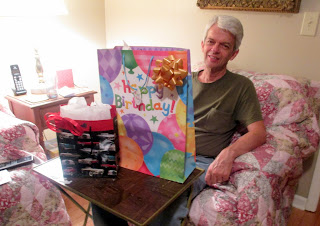 Here, above, Greg is beside the same lamp which has what appears to be ectoplasm. However, we are unable to get a picture of the floating ectoplasm around the lampshade since it's almost in total darkness when it occurs.

Greg hadn't told me about the above paranormal incidents sooner because either he'd just forgotten about them, and/or he'd thought that maybe his eyes were playing tricks on him.

Greg seems to be very psychic. He has seen at least one ghost which I mention in my paranormal book, "Photographic Encounters of the Spirit Kind," available now, either in paperback or as a kindle download on Amazon.

Also, if you could use a little more positive in your life, you might enjoy my other blog,

Paranormal incidents are very unpredictable! Case in point: While I was taking a break from writing this blog post, I noticed that our neighbor's cat was looking in the window from outside at our cats that were inside. I thought it would be cute to take a picture of these cats looking at each other. With the photo I took, I got much more than I bargained for! I'll share it on my next month's "Spirit Photographs" blog post! Please stay tuned!

Thanks for visiting! Until Saturday, October 21, 2017, Becky


Posted by Becky Arnott at 6:52 PM No comments: