On my other blog, "The Art of Positive Living," I recently wrote a post (11/5/17) entitled "Celebrating Fall, Tennessee Style." In that post, I mentioned that Greg and I went to "Pumpkinfest" in Franklin, Tennessee.

Well, on today's post, I have a picture that I took during that same festival, but this photo, unlike the other photos on that "Positive Living" post, has a paranormal twist to it. We might even say that in some respects, according to this photo, this is a haunted fall festival! 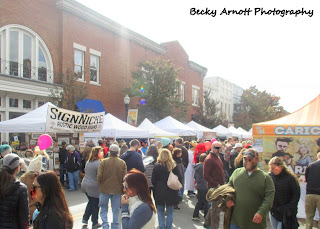 Notice the light (ectoplasm) streaming down the front of this building. Also, just to the right of the streaming light, notice the orbs in front of the tree. (I tried to blot out many of the people's faces in this photo for privacy. Otherwise, all I did to this photo was to crop it some, and I added my watermark.)

Spirits seem to like gatherings of people, where there's a lot of energy, and this festival certainly had that with all that was going on there, plus there were a lot of people that attended this festival.

Besides festivals, other places that spirits like to be are parties, family gatherings, schools, and churches, especially if there is something really special going on like a wedding or a funeral. They even haunt graveyards around monuments and memorials honoring them.

Spirits also like to be around objects like memorabilia or something that was important to them while they were alive.

Our loved ones that have passed on like to be around us.

Talented psychic, Justin Chase Mullins, from the Appalachian Mountains of Southwest Virginia says, "The Afterlife is not some far away place in the sky. Rather, our loved ones are very near us. You are surrounded by other dimensions and beings."

From the evidence Greg and I get by taking our paranormal photos, I believe the above quote is very true!

In fact, I have written a book on the paranormal, "Photographic Encounters of the Spirit Kind" that is  available now in paperback or as a kindle download.

Thanks for visiting! Until Saturday, December 16, 2017, Becky


Posted by Becky Arnott at 2:10 PM No comments: