Ectoplasm in a Mini-Park

Wow! Have Greg and I been busy the last few weeks! We got ready for Greg's birthday cookout which was last weekend. It was a lot of work since we're still trying to fix up our old house which is now mostly done. One really great thing about our house though is that it appears that it is no longer haunted, thank goodness!

This week has also been hectic, and we're attending a big family event tonight.

However, I still made time to work on my monthly "Spirit Photographs" blog post. I never panic about not having something to write about since weird stuff shows up in so many of the photographs that I take.

As I looked through my photos, and I decide to show two that I took in Abingdon, Virginia a couple of months ago. Greg and I were on our weekly shopping trip when I happened to notice that near one of the shops downtown there was a pretty little park that I would call a mini-park. I took several pictures of it since I thought it was so unique, an area between two old buildings, that brought in a bit of nature and nice artwork for people to enjoy.

The two photos below were the best ones that I took: (The only changes to the pictures were that I cropped them off some and I added my watermark.) 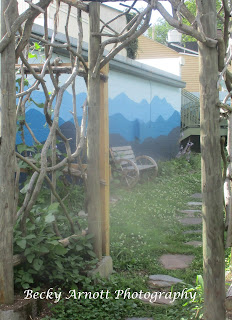 Notice the general ectoplasm in the foreground of the photo above. 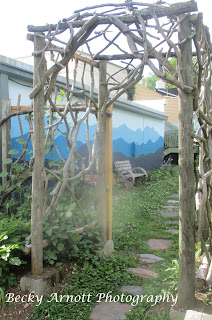 The ectoplasm in the photo above looks more like a large orb around the far center post.
Why is there ectoplasm here in this mini-park? It could be that some person or animal died here or that spirits are just attracted to the serene beauty of the place.
Abingdon is a very old town so it's to be expected that there are many ghosts and spirits around. Because of this fact, Abingdon has at least two ghost tours, Abingdon Spirit Tours and Appalachian GhostWalks. Strangely enough, we haven't taken the time to go on either tour, (Too many other irons in the fire!) but we hope to in the near future. When we do, you will be the first to know!
To see more paranormal photographs that Greg and I and others have taken, check out my book, "Photographic Encounters of the Spirit Kind" which is for sale on Amazon. (Please see the widget above.)
Thanks for visiting! Until Saturday, September 18, 2021, Becky
Posted by Becky Arnott at 11:57 AM No comments: