Greg and I don't have to go very far to find a haunted town, because we live in one, Columbia, Tennessee!

Columbia is an old historic town where James K. Polk, the 11th president of the United States, lived for a time.

When we first moved here, we took an interesting "Columbia Ghost Tour," and found out just how haunted Columbia really was, with many stories of strange things that happened to regular folks just like you and me.

For more info about the haunted tour, go to:

And, also, see my previous 8/24/12 "Spirit Photographs" blog post about the Columbia Ghost Tour when we went on it.

Last month, we went to the annual Mule Day parade in Columbia, and were just trying to get some good pictures of the parade, when we got an unexpected bonus in several of our photos, ectoplasm, in the daylight, without any camera flash!

Check out the photos below that Greg and I took- 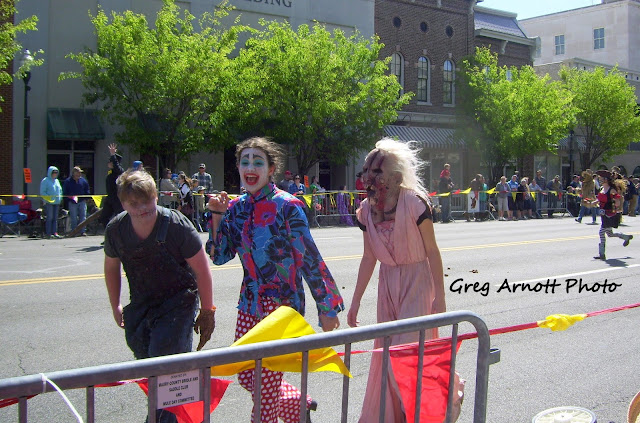 This photo is one of several that Greg took that had ectoplasm. Notice the lower part of the building behind the girl on the right.

After the parade, we went to a restaurant for lunch, and every picture I took of it was "fogged' over with ectoplasm! 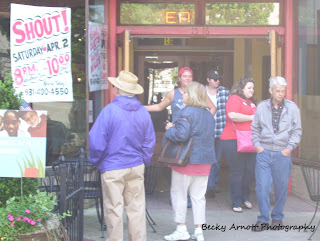 This place must really be haunted! Compare the clarity of Greg's photo to the one I took of the restaurant to see how fuzzy my photo really is.

This restaurant is relatively new, so I don't think it was in existence when we went on the ghost tour. If it isn't mentioned on the tour now, it probably should be!

Come and check out haunted Columbia, Tennessee for yourself sometime. Bet you'll be glad you did if you like the paranormal!

Thanks for visiting! Until the first weekend in June, Becky...
Posted by Becky Arnott at 3:36 PM No comments: