On my last two "Spirit Photographs" blog posts, I mentioned that I was trying to get in touch with a psychic for a reading, and a few days ago, I did just that, finally!

The psychic that did my phone reading is very talented. Not only is she clairvoyant (seeing), clairaudient (hearing), and clairsentient ((feeling), but she is also a psychic medium, as well.

I was really pleased with how well the reading went. I had several questions for her since I don't contact psychics as much as I used to.

One of the first questions I asked her was what our two cats, Kallie and Mitzi, see when they seem to be staring into space, looking at something I can't see. Her answer was, not surprisingly, spirits.

One really eerie thing that has been happening recently with our cats is that at bedtime, Greg and I notice that Mitzi has been hanging out on our third floor (which we mostly use for storage) near a photo collage I made in memory of my mother for her funeral which features pictures of her and several of her family members and friends. 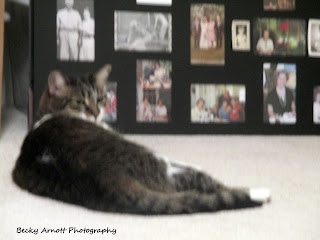 Mitzi, Lying in Front of Collage

Also, Mitzi sometimes lies in front of a large painting my father did of Mama many years ago that we have standing up on the floor near the collage. Mitzi is a very social cat that loves being around people, and now apparently spirits, since the psychic said that some of the spirits featured in the collage like to be near the collage and the painting!

A few nights ago, I was looking for Kallie, and I saw her lying in front of the painting of Mama, as well! Kallie copies Mitzi a lot, and I guess she didn't want to be outdone by her!

Also, the psychic answered a couple of  questions I had about Greg-

I mentioned to her about Greg seeing a UFO a few weeks ago (Please see my 3/25/17 blog post for more details.), and she said that it definitely was a space-alien craft, but it was a friendly visit, and that it was an honor that Greg got to see it!

Another really weird thing that happened a few weeks ago was that Greg was in his car, and as he was making a turn to the left, he noticed a girl walking beside the road who was wearing tights and a shirt, and she was carrying a cell phone. After he made the turn, he said that he looked in the rear view mirror, and she wasn't there where she should have been!

I asked the psychic about the incident, and she said that it was a spirit, and that the veil between our world and the spirit world was growing thinner. She said that Greg is pretty psychic, and that we can all see more if we're open to it. Be grateful for seeing more.

The reading was excellent, and Greg and I learned a lot from it.

I just wanted to share with you some good news about my book, "Photographic Encounters of the Spirit Kind." A woman from a publishing company emailed me and said that my book was one of only ten books in my genre that was selected by their literary book scouts to be included in a large upcoming book fair here in the United States because it was of such "good quality." She said my book was very relevant for today. I may decide not to do it, but I feel it was such an honor just to be asked.

Posted by Becky Arnott at 8:13 PM No comments: