Wow!  I have a very interesting photo for you on this blog post.  It was sent to me by a friend in Greeneville,Tennessee.  This person who took the photo has always had a fascination with clouds and even enjoys photographing them.

One evening last month, she took a series of three photographs of some pretty clouds from her back porch, when, to her surprise, after looking at the photos, she detected something that looked like an orb in her second one.  (In her first photo, she thought it looked as though the orb might just be forming and in the third one there is no orb in sight.) 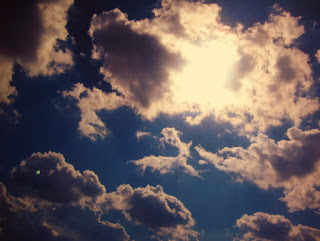 The orb in this photo is pretty obvious.  A psychic told me that anomalies that glowed were paranormal in nature.


This Greeneville photographer said she enjoys my blog and thought I might be interested in seeing the photo.  I told her I was, so she sent me an 8x10 hard copy which I photographed with my camera to put on this blog post.

I also took the photograph to a photo machine in my favorite big box store and cropped it off and enlarged it.  I was amazed at the variety of colors the orb has.  I'd never examined one that closely before. 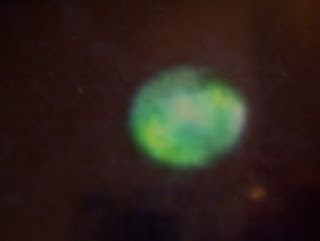 After enlarging it, to me, it looks like there's a white star in the center of the orb, along with two or three other star shapes.

My husband Greg and I have taken several pictures with orbs, but never so far up in the sky as this one!

What do you think?  Please feel free to send a comment about this unusual phenomenon.

Thanks to the photographer and her husband for sharing this fascinating photo with us!

Also, if you have anything paranormal to share, please email me:  spiritphotographs@gmail.com
(In fact, you might want to email me with any comments, also, because some people are having trouble commenting the normal way.)

One person emailed the following:  "What a wonderful photo!!  When I first saw the orb, I thought it was just the reflection of the sun in the lens of the camerea.  But considering the object's small size and location, I had to dismiss this idea.  The beautiful color and sharpness of this feature almost suggests a UFO-type image.  Thanks for sharing this!!"  BN of Greeneville,TN.  (I appreciate this person's great feedback.)

Thanks for visiting!  Until next Saturday, Becky
Posted by Becky Arnott at 10:11 PM