Paranormal Photos, One Real and One Not Real!

I take a lot of pictures because I love photography, and because I also sell downloads of my photos on iStock which is a part of Getty Images.

When I take pictures, 95% of the time, I don't even think about, or try to take paranormal photos. Fairly often, however, I do get strange images in my photos which I can't always explain.

One day, a few years ago, I noticed that I had so many paranormal photographs that I decided to write a book about them. The book I wrote is entitled "Photographic Encounters of the Spirit Kind" which is now available either in paperback or as a kindle download on Amazon. There are over 100 paranormal photographs in the book that I and other people, including my husband and brother, have taken.

A couple of weeks ago, my husband Greg, and I were in town, trying to find a building to meet someone we know, so we went up a street that we don't normally drive on. I looked up and saw an old white house, and I asked Greg if that was where an old doctor used to live (It was also his clinic.), and Greg said it was.

We learned during a ghost tour a few years ago that the house was very haunted. After the doctor moved out or died, the house was sold. The house has changed hands several times since no one lives there very long.

This was one of the few times that I decided to hurriedly take some pictures as we were driving along, to see if I could get anything paranormal. 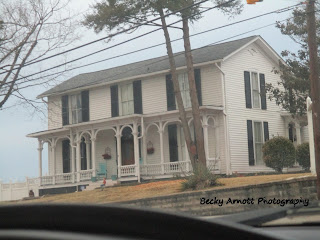 Later, after we got back home, I decided to look at the photos I'd hastily taken. I examined them closely, especially around the windows, since that's where spirits show up in houses so much of the time. If the spirits were there, I couldn't see them since all but a couple of windows were covered by curtains or blinds.

Then, I noticed a weird figure of a little boy sitting on something like a stool in the front yard. It looked as though you could even see through his legs. Scary!

Anyway, a couple of days later, I got brave and decided to revisit this old house to take more pictures, to see if I could again spot the little ghost boy.

Much to my surprise, the ghost was actually a little yard statue! It had looked so real that it had fooled me, and everyone that I'd shown it to had thought it was real, too! (His legs had looked transparent because the boots he was wearing blended in with the color of the background.)

However, there are at least three real apparitions in my paranormal book including the famous June Tolliver House ghost photo which my brother, Nick, took. Apparitions are rare, but when conditions are right, they can appear. You're really lucky if you can capture them on camera.

This was just not one of those times.

However, my next photo is very real! There are no apparitions, but the photo is a real mystery!

Greg and I love going to parks, so on a rare warm winter day a few weeks ago, we decided to visit a nearby park.

This time of year, there's not really a whole lot to photograph, but as I walked by the river, I thought that I might get a good shot that I could use on iStock.

Instead, I decided that the photo was more suitable for this "Spirit Photographs" blog! Here it is- 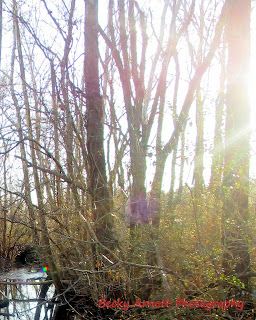 Notice the lavender-colored ectoplasm on the trees, and even stranger is the cluster of tiny colored balls just above and to the right of the river. I have no idea what these represent, but I need to find a psychic to explain these to me. The only other time I've noticed this phenomenon was in a photo that I featured in my 11/18/17 blog post entitled, "A Haunted Fall Festival."

Life is mysterious, but I'll be right here, the third Saturday of every month, with my "Spirit Photographs" blog so we can explore and try to solve these supernatural mysteries together!