(You can now get Photographic Encounters of the Spirit Kind on Amazon and Barnes and Noble.)

(An important Facebook note:  The Becky Arnott Facebook page has been replaced by the Photographic Encounters of the Spirit Kind page.  I really appreciate those of you who were on the other page.  I really enjoyed your comments.  Sorry for any inconvenience.  We'll start fresh with this new permanent page.  We've hopefully now gotten our act together!  Thanks!  Becky)

My husband Greg and I were so hopeful when we moved into our new home a couple of months ago that we'd left our haunted-home past behind us.  Nothing significant had shown up in the photos we'd taken of our house before we moved in.  However, some things have happened in the past few weeks that have led us to believe that our new house is, unfortunately, haunted.

At first, little things started happening.  A ceiling fan turned on by itself.  The cats stared into space as if they were seeing something happening.  I heard the sound of a squeaky doorknob upstairs several different times when no one else was in the house.  I found a package of cookies open on both ends.  Why?

Then, early one night, when I was upstairs at the computer, I heard a loud crash downstairs.  Afraid that something bad might have happened to Greg, I ran down the steps, fearful of what I'd find.  Thankfully, Greg was in the downstairs bathroom, and he was OK!

Together, we looked around to see what had caused the loud noise.  Greg found a large board that had fallen from its perch in the garage near the ceiling (where apparently someone had started building something.)  We'd never noticed that board before.  There was another large board up there which Greg quickly took down.

That first board had somehow just fallen on its own.  It could have been worse.  Greg had been in that very same area of the garage only ten minutes earlier! 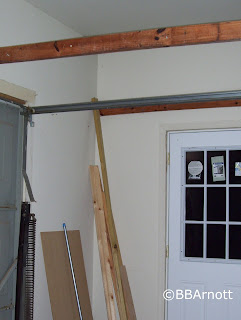 (This story will be continued next week.)

Thanks for visiting!  Until next Saturday, Becky
Posted by Becky Arnott at 10:51 AM