(I would appreciate anyone who has read my book, Photographic Encounters of the Spirit Kind , to leave a review at either amazon.com or barnes&noble.com.  Thank you!)

In last week's blog post, published on August 18, I was telling about some of the paranormal things that have occurred in our new house.

The worst thing that happened was the large board falling on its own in the garage which could have harmed my husband, Greg, had he been standing there.  I took this as a warning of things to come. Then, I remembered what a psychic friend had told me to do when wanting to get rid of any negative entities.  She told me to order them to leave, which I did.  I was furious that they would do such a thing to us, so Greg and I yelled at them and told them to leave in the name of God.  I said that when so ordered that they must leave immediately!  I said that all negative spirits must leave, because if we ordered all spirits to leave, the plants, etc. would die!

(Later, we told our neighbors about the board falling, and they said that they had remembered a loud crashing sound from the vicinity of our house and had wondered what it was.  It was that loud!) 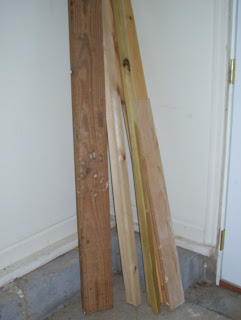 (I found out a few days after I had published last week's blog post that the board that actually fell is the board pictured on the left.  I mistakenly took a picture of the wrong boards.  This board is even heavier and larger than the other ones.  No wonder it made such a loud noise when it fell!)

I was happy we'd done this, to try to get rid of  the negative entities, but I still felt uneasy about it all.
I then decided to contact a local psychic, to see what the heck was going on, because although nothing else major was happening, there were still little things, like hearing strange noises, and Greg getting locked out of the house!

The psychic came and walked through our house, and what she said was amazing to us.

(What she told us I will reveal on next week's blog post.  Please stay tuned!)

Thanks for visiting!  Until next Saturday, Becky
Posted by Becky Arnott at 5:57 PM