The Haunting Lure of a Lake

Great to have you back!

Greg and I had a close encounter or two with the spirit world during these past few weeks, as we usually do!

Not long ago, we met some family members in beautiful Lake Lure, North Carolina.  We stayed at lovely "The 1927 Lake Lure Inn and Spa" where the stars and crew of the hit movie, "Dirty Dancing" stayed while filming was going on. 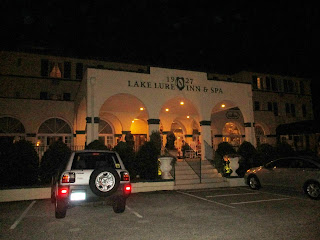 Our sister-in-law who is really into the paranormal as we are, was staying with her husband at another place at Lake Lure that she knew was haunted.  We had wanted to spend the night there, as well, but we were unable to get a room, so we ended up at the 1927 Inn.

I had told Greg before we left for Lake Lure, that I bet our place would be haunted, too, that Patrick Swayze, the star of "Dirty Dancing," probably haunts that place.  We found out that apparently, the inn is haunted!

We were fortunate enough to have been just down the hall from a room that was supposed to be haunted, number 217, since a murder-suicide had taken place there.  Once, a guest even left that room early, during the night.  Animals that have stayed in the room don't seem to like it, as they nervously pace the floor until they can leave.

And, close by, was the suite, number 215, where Patrick Swayze stayed.  Although no one said anything about his suite being haunted, a couple of pictures I took outside his door had some ectoplasm.  Whether the ectoplasm was just a spillover from the nearby haunted room or not is anyone's guess. 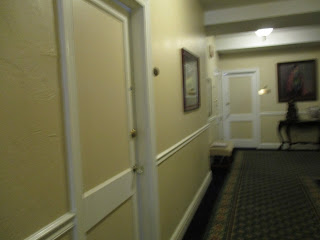 Left, the "Haunted" Room, and at the End of the Hall, Patrick Swayze's Suite

I would't be surprised if Patrick Swayze's ghost was right there, though, because I can see how anyone who had stayed there would want to haunt that fabulous place!  It's a little bit of heaven on earth!

The people in charge of the inn are not shy about it being haunted as you can read about the paranormal goings-on in the lobby, and/or talk with an employee who has had first-hand encounters with the spirit world.

We got to talk with another Patrick, the events coordinator, at the inn, who  had captured a ghost boy on his camera during a wedding there.  We were fortunate that we got to see the photo with the distinct ghostly image.  Patrick was very lucky (and gifted!) because capturing an apparition on camera is a rare event!

That wasn't all!  Patrick also told us that he'd also been touched on the shoulder three different times there at the inn.

In addition, a housekeeper had seen an apparition in a white dress that even spoke to her.

Several other paranormal events have happened there, as well.

We got paranormal grids in several of the mirrors there (in the ladies' room, the hallway, and even the haunted room [My sister-in-law and I asked the guest staying in that room if we could take a couple of pictures of his room since it was supposed to be haunted.  He was a good sport about it, but said he'd not tell his wife that it was haunted as she would want to leave.  It would be interesting to see how they got through the night!]  There was nothing paranormal going on in Greg's and my mirror [or room], so we had a good night's sleep!)

Another reason there is so much spirit activity going on there is perhaps because it was a hospital for a time.

Anyway, if you'd like to go visit a fantastic place that has it all (even ghosts!), you might want to take a trip to haunting Lake Lure, North Carolina!